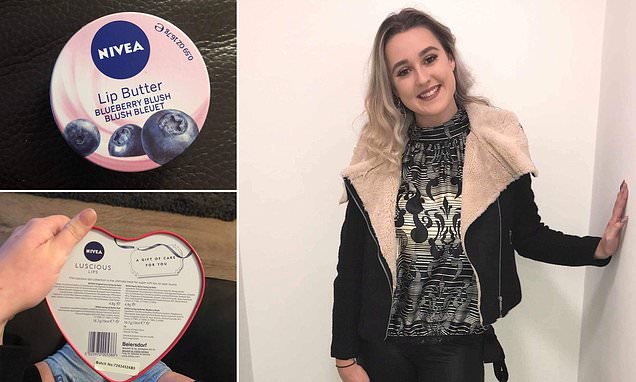 ‘My lip balm could have killed me’: Student was left fearing for her life after suffering allergic reaction to NIVEA product ‘which she didn’t know contained nut oils’

A student with severe nut allergies claims she was left fearing for her life after a suffering a potentially deadly reaction to a lip balm.

Amy Brown, from Middlesbrough, was careful to read the set of ingredients on the outer packaging of a NIVEA gift set she received for Christmas.

However, she claims she did not recognise sweet almond oil labelled under its chemical name Prunus Amygdalus Dulcis.

The 19-year-old tried not to panic as her lips tingled, throat became itchy, and a rash appeared on her hands, and took medication to relieve the symptoms.

NIVEA claim it has not broken any laws – almond oil was listed on the individual lip balms contained within the pack. But Miss Brown did not think she would need to check.

Miss Brown, who has been allergic to all nuts and sesame seeds since the age of four, is now urging cosmetic and food industries to be clearer, as the ingredients could have led to fatal consequences. 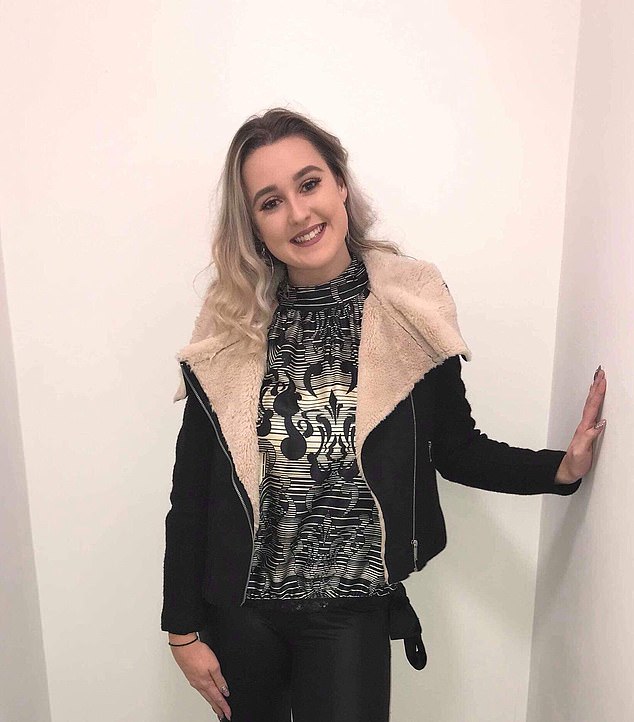 Amy Brown, 19, from Middlesbrough, has had nut allergies since she was four years old. She managed to control her reaction to the NIVEA Blueberry Blush Lip Butter immediately 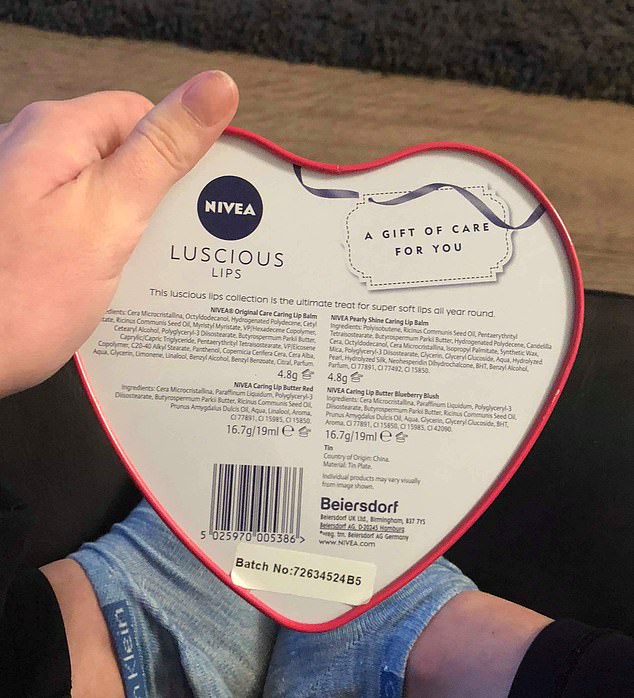 Miss Brown said she checked the gift set packaging – but not the lip butter itself – for ingredients. She thought the product was safe before applying 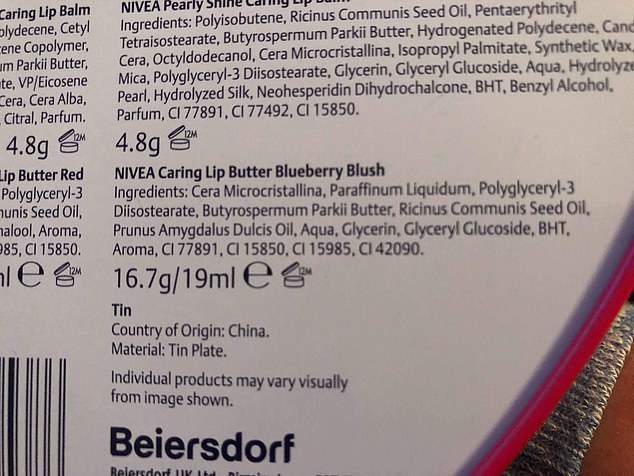 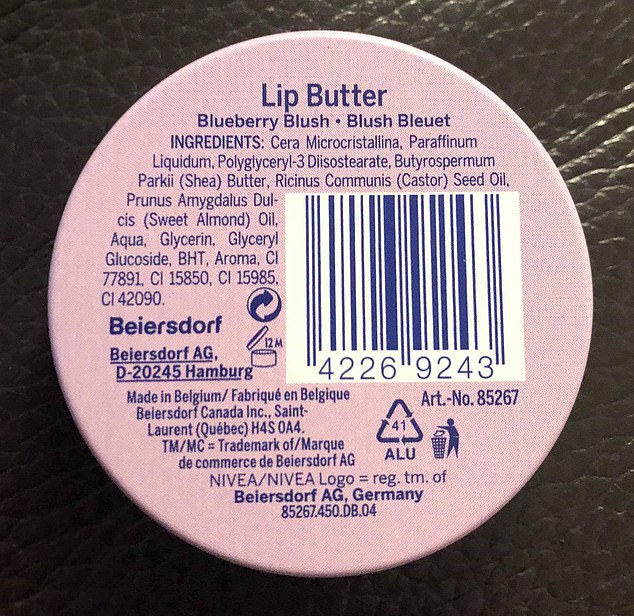 On the lip butter product, sweet almond oil is labelled in brackets. Miss Brown has urged cosmetics to be more clear, as her reaction could have been fatal

She said: ‘Not stating it properly has made me anxious – what other products don’t have clear labels? It was a terrifying experience but one that I wanted to turn it into something positive.

‘I want to alert NIVEA to the fact that not clearly stating that nuts are in their products could be extremely dangerous for thousands of people who suffer from nut allergies like myself.

‘We have standards for food labelling in regards to allergies, but cosmetic appear to be lagging far behind and I think it’s time that more is done about it.’

On January 7, after having carefully inspected the ingredients on the tin, with the help of her mother, Carolyn, 47, a nurse, Miss Brown applied some of the Blueberry Blush Lip Butter.

Within seconds, Miss Brown began to feel her lips tingling and saw a rash on her hands due to touching the application of the lip balm.

She calmly wiped off the NIVEA lip balm, took anti-histamines, her inhaler and throat lozenges to try and counteract the terrifying symptoms before they escalated.

Miss Brown was on her own at the time, but a family member was able to rush home to be by her side.

Speaking of her ordeal, she said: ‘I knew how to deal with it but it panicked me. My breathing went quite quick at the time and I was shaky.

‘I’m really careful. I’ve lasted my whole life not having a reaction until a reaction last year. There are quite a lot of makeup products I don’t use because I know what to look for.’

Thankfully, by catching the reaction quickly, Miss Brown did not need to use her lifesaving EpiPen or steroids which she carries with her at all times. 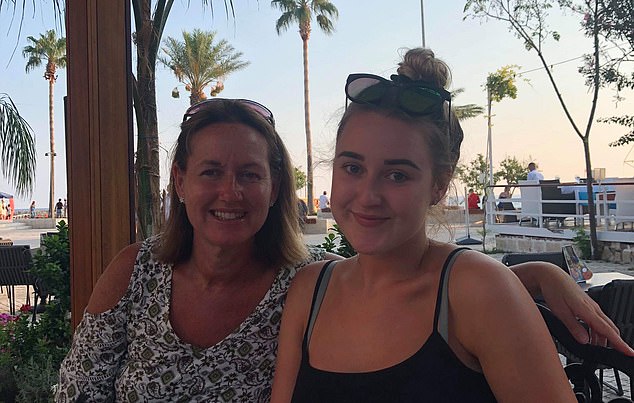 Miss Brown was alone when she suffered her allergic reaction. She remained calm, knowing that previous reactions had led to hospitalisation 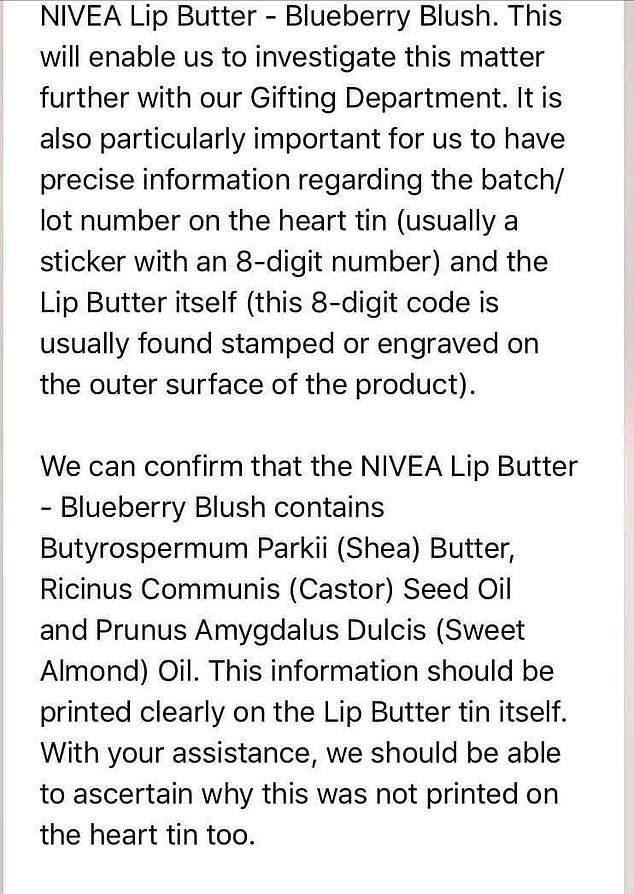 In an email, NIVEA confirmed that the lip balm contained sweet almond oil

Her tingling lips and scratchy throat eased within two hours, but she had a sore throat that lasted for the rest of the day.

She said: ‘When I had the reaction, when I swallowed it felt like a had blisters on the back of my throat that I wanted to scratch.

After I took the anti histamines it just felt sore, like blisters that burst. It’s a strange feeling to explain.’

It was only when Miss Brown and her mother subsequently checked the back of the individual tin of the Blueberry Blush Lip Butter that they discovered it contained sweet almond oil.

Although its chemical name – which they did not recognise – had been written on the main gift tin, the ‘sweet almond oil’ had not been.

When the mother and daughter contacted NIVEA to make them aware of the potentially life-threatening problem, their response was that legally they have complied with European Law by listing the INCI (International Nomenclature for Cosmetic Ingredients) names on the exterior gift box.

Although on this occasion Miss Brown didn’t require hospital attention, her allergies have led to terrifying situations in the past.

She has two carry two EpiPens, incase the first one does not work, because she is at such a high-risk.

While on holiday in Turkey with her family on in August 2018, she ate a tart which she didn’t know had nuts in and was rushed by ambulance to intensive care.

‘It was the most terrifying experience of my life,’ Miss Brown said. ‘My heart rate went up to 180 and I was vomiting, my ears swelled and I was covered in hives.

‘My mum called an ambulance and I spent 24 hours having adrenaline, antihistamines and steroids administered in intensive care.’

A NIVEA spokesperson said: ‘We always appreciate feedback from our consumers and take any concerns with regard to our products very seriously.

‘As stated in our conversation with the consumer, the INCI labelling of the Lip Butter gift box and the Lip Butter balm tin itself is in full compliance with the EU Cosmetic regulation provisions.

‘In this case, the contained almond oil has been indicated by the respective INCI name Prunus Amygdalus Dulcis – both on the exterior gift box, as on the individual balm tin.’

Natasha Ednan-Laperouse, 15, was on a dream trip to Nice with her best friend and her father when she ate a sandwich laced with sesame seeds not listed on the label.

After eating the artichoke, olive and tapenade baguette she went into anaphyactic shock and broke out in red hives. She later died in hospital 800 miles away from home on the Cote d’Azur.

The fast food chain did not break the law by not having allergy information on the product itself, as a legal loophole does not require restaurants to do so if its products are made fresh in store – like Pret.

Following Natasha’s death and prior to her inquest, Pret updated the allergy information on its shelves – but their labels still have no ingredients list.

Writing in the Sunday Times Mr and Mrs Ednan-Laperouse explained how they had always taken extra care when it came to ‘Tashi’s’ severe milk, egg, avocado and sesame allergies.

She believed the baguette she picked up from Pret was ‘safe’ because that is what she often eat on holiday with the family in France.

But without a label on it, Tashi missed the allergy notice on the shelf saying it contained sesame.

They now want ‘Natasha’s Law’ in place as soon as possible.

Her parents wrote: ‘On the day she died, we checked and found out there were sesame seeds in the baguette, which had not been declared on the packet.

‘We knew immediately that was what killed her.

‘We got up the next day and visited chain stores such as Waitrose, Tesco, Costa Coffee and Wasabi. Their sandwich packets or shelf signs clearly declared the ingredients and allergens.

‘Companies such as Pret must now be required by law to put ingredients and allergen warnings in bold packets.’