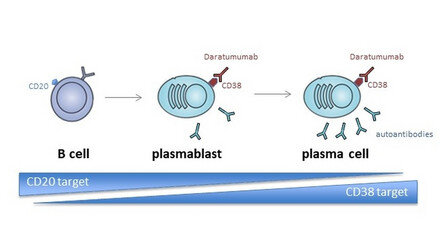 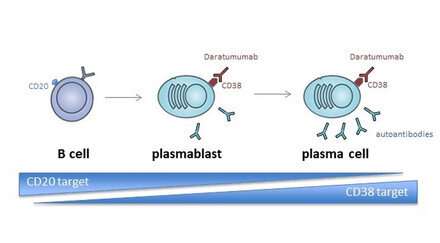 A team of researchers from Charité–Universitätsmedizin Berlin and the Deutsches Rheuma-Forschungszentrum (DRFZ) Berlin, a Leibniz Institute, have successfully treated two patients with the autoimmune disease systemic lupus erythematosus. Using daratumumab, a monoclonal antibody which targets specific immune cells known as plasma cells, the researchers were able to modulate the abnormal immunological memory processes found in these patients. Treatment induced sustainable clinical responses and resulted in a reduction in systemic inflammation. The results of this research have been published in the New England Journal of Medicine.

The body’s immunological memory enables the immune system to respond more rapidly and effectively to pathogens that have been encountered before. This immune response is mediated by both memory T lymphocytes and antibodies, which are produced by cells known as ‘plasma cells’. Mature memory plasma cells reside in special niches in the bone marrow and are able to produce large amounts of antibodies for decades or even a lifetime. In autoimmune diseases, the immune system mistakes part of the body as foreign and considers it a danger. In a process that is assisted by the body’s immunological memory, the immune system mounts a response using ‘autoantibodies’. Systemic lupus erythematosus (SLE) is a prototypical autoimmune disease in which antibodies are produced against components of the body’s cellular nuclei. This autoimmune response is associated with inflammation that may affect the skin, joints, or internal organ systems such as the kidneys, heart or central nervous system. Traditionally, treatments have relied on the long-term suppression of the immune response. Until now, however, they have not been targeted at mature memory plasma cells.

For the first time—and working alongside colleagues from the DRFZ (led by Prof. Dr. Andreas Radbruch)—Charité researchers, led by Dr. Tobias Alexander, have studied the effectiveness and tolerability of a plasma cell-specific treatment in two lupus patients who failed to respond to conventional therapies. “In a certain proportion of patients, the disease cannot be controlled using currently available treatments. As a result, there is a desperate need for novel and targeted treatment approaches,” explains study lead Dr. Alexander, who is Head of Rheumatology Outpatient Services at Charité’s Department of Rheumatology and Clinical Immunology and also conducts research at the DRFZ.

The researchers focused their efforts on the monoclonal anti-CD38 antibody daratumumab, which has been used for years to successfully treat patients with plasma cell cancer. The role of plasma cells in autoimmune diseases has been a major focus of the work conducted by the research group led by Dr. Alexander and his co-author, Prof. Dr. Falk Hiepe. “CD38 surface protein is considered a classic plasma cell marker. However, our preliminary investigations have shown that, in patients with lupus, increased levels of this marker can also be detected in other active immune cells such as memory T lymphocytes, as well as in the blood and urine,” explains Dr. Alexander. This makes CD38 an ideal target for treatment, which aims to eliminate the pathologically altered immune cells.

The recipients of this new treatment were two female patients with life-threatening lupus, whose symptoms included inflammation of the heart and kidneys and antibody-induced anemia. Weekly administrations of daratumumab over four weeks resulted in a rapid and significant improvement in symptoms, which remained stable for several months. The patients also showed a marked decline in serum autoantibody levels. Using state-of-the-art immunological techniques—including single-cell sequencing—the researchers were furthermore able to show that daratumumab has a positive effect on active T lymphocytes, which are thought to play an important role in disease development. No relevant side effects were recorded. Although testing revealed a decline in protective antibodies in the blood, this was not associated with increased susceptibility to infections.