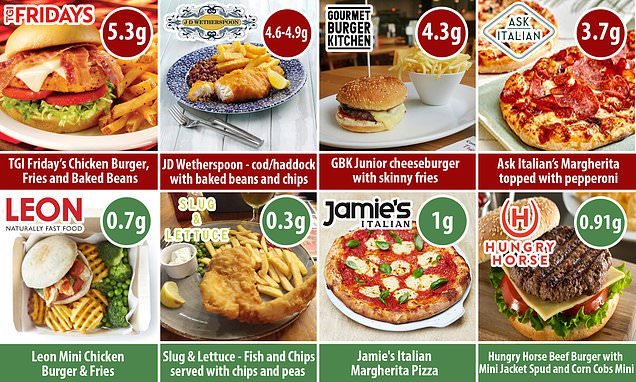 The saltiest meals for children at Britain’s most-loved restaurants: TGI Fridays’ chicken burger tops the charts with 5.3g – the equivalent of 11 bags of ready salted crisps

The saltiest children’s meals on the high street have been named and shamed by campaigners.

Action on Salt found the worst offender contains the equivalent of 11 bags of ready salted crisps.

TGI Fridays’ chicken burger with fries and baked beans was the worst offender, with 5.3g of salt per serving – but the company denies this is true.

Action on Salt analysed the ‘shocking’ salt content in 351 meals from UK chain restaurants and warn food companies are neglecting their responsibility for customers’ health.

More than a third of meals contain at least a three-year-old’s entire daily limit in one serving, and the number of portions exceeding this limit has risen since 2015. 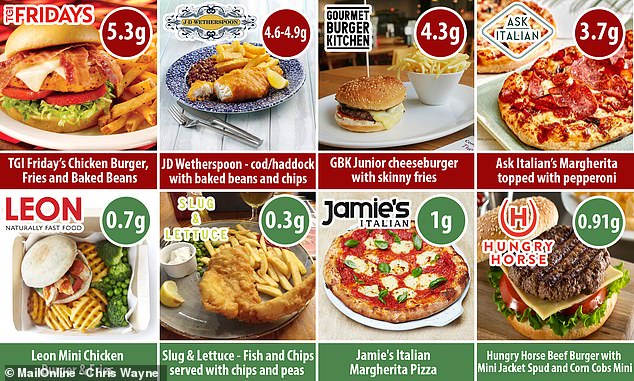 Action on Salt’s research revealed 144 meals breach Public Health England’s target of 1.8g of salt or less in a child’s meal. TGI Fridays’ chicken burger with fries and beans was found to be the worst offender, with 5.3g of salt

Action on Salt, run from Queen Mary University of London, is now calling for the high-salt warning labels to be enforced like they are in New York.

And some of the worst offending restaurants include JD Wetherspoons, Gourmet Burger Kitchen, Pizza Hut and Harvester.

‘It is well known that dietary habits formed in childhood influences what you eat for the rest of your life.

‘Protecting children’s health should be a priority for all food and drink companies – the out of home sector must act now and take salt off the menu for children.’

Other meals in the 10 saltiest included Wetherspoons’ freshly battered cod or haddock with chips and beans, which contain 4.6-4.9g of salt per serving.

From Gourmet Burger Kitchen, the children’s cheese burger, veggie burger and grilled chicken burger all contain more than 4g of salt when paired with fries.

And the Harvester’s vegetarian sausage with ‘Yorkie boat’ and gravy (4g) or the scrambled egg on toast with sweet potato fries (4g) were also in the top 10.

Most of the meals were measured using publicly available nutrition information but for those with none – including the TGI Fridays’ burger – a meal was ordered and later tested in a lab.

More than four grams of salt is too much for a child younger than seven to eat in an entire day, let alone in one meal.

Toddlers should eat no more than 2g per day, according to the NHS, four to six-year-olds no more than 3g, seven to 10-year-olds up to 5g per day, and people over the age of 11 should limit themselves to 6g total per day.

10 MEALS WITH THE MOST SALT

10 MEALS WITH THE LEAST SALT

‘As a parent, it is so hard to try and find food and drink products that are both nutritionally balanced and appeal to your kids,’ said AOS’s Katharine Jenner.

‘Children aged four to six should have half as much salt as an adult – just 3g – a day maximum yet they are eating much more than this.

‘These food companies have known for years that they need to reduce salt, yet they are neglecting to do their civic duty and are putting our children’s health at risk.’

Eating too much salt can cause your body to store more water to rehydrate, which raises blood pressure.

As your blood pressure gets higher so does your risk of developing heart disease or having a stroke.

Some 37 per cent of children’s meals contained more salt than the Public Health England 1.8g guideline. This was a rise from 29 per cent in 2015.

The campaigners said the rise showed food companies are not serious about the problem and are now calling for mandatory warnings to customers when a meal goes above 1.8g.

Most agencies recommend eating three quarters of a teaspoon of salt each day, but many adults eat more than that.

An individual-sized bag of chips accounts for about seven to 12 percent of daily sodium intake, so a high salt diet would be the equivalent of eating more than eight bags each day.

The balance of fluids and sodium in the body is crucial to homeostasis, which keeps systems operating in sync.

When there is too much sodium in our systems, our bodies retain excess fluid to try to balance out the salt.

The fluid makes the heart have to work harder to pump blood, leading to higher blood pressure.

Higher blood pressure also makes it more difficult for the heart to push oxygen-carrying blood to various organs, including the brain, which lead to cognitive declines.

Companies managing to keep their meals low in or free from salt were Wimpy, Harvester, Loch Fyne and Slug and Lettuce.

And seven out of the 10 least salty meals were fish dishes – most from Harvester – with the same number claiming to contain no salt at all.

Action on Salt, concerned that people in the UK eat 8.1g of salt per day on average, is calling for restaurants to do more to reduce salt and for tougher action from the Government.

The charity’s chair and professor of cardiovascular medicine at Queen Mary, Graham MacGregor added: ‘The Secretary of State for Health has promised long awaited new voluntary salt reduction plans in his green paper by Easter 2019, and they can’t come soon enough.

‘Reducing salt is a shared responsibility between the food industry, individuals and the government and is the most cost-effective measure to reduce the number of people dying or suffering from entirely unnecessary strokes and heart disease.

‘We’ve already seen the success of the UK’s previous work on salt reduction and we encourage the Secretary to mandate his plans, formalising them and helping to ensure progress is sustained, with huge cost savings to the NHS.’

TGI Fridays’ denies its chicken burger contains as much salt as Action on Salt’s research claims.

In a statement a company spokesperson said: ‘We strongly dispute the findings of the Action on Salt survey, as independent nutritional analysis has shown our kids chicken burger meal to contain 1.5g of salt, not 5.3g as cited in the report.

‘This is all the more disappointing as we have long supported the Government’s salt reduction programme since 2012, with a focus on children’s meals.

‘We will continue with our work on salt reduction across all our menus as well as other nutrients in support of the Government’s ambition to tackle childhood obesity.’