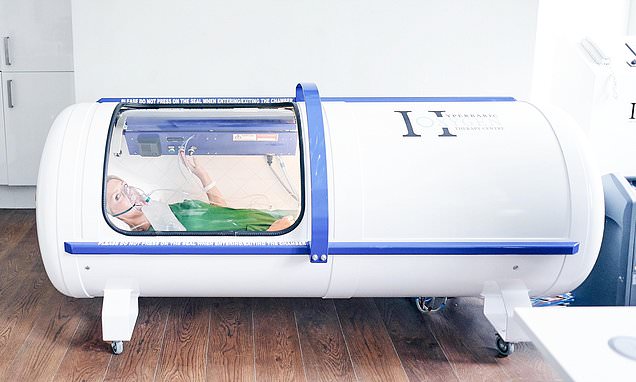 For decades it has been used to treat divers with the ‘bends’ — potentially deadly nitrogen bubbles that can form in the blood when surfacing quickly from deep water.

But pressurised chambers that deliver 100 per cent oxygen to the body can also bump-start the healing process, and they are now being used for a wide range of conditions from diabetic ulcers to damage caused by cancer radiation treatment.

It’s even being investigated as a way to reverse ageing.

Singer Justin Bieber has used it to ‘de-stress’, while Sky news presenter Jacquie Beltrao revealed on Twitter last month that she had included it in her treatment for advanced breast cancer. One theory is that cancer may struggle to thrive when the body is flooded with oxygen, although this is not proven.

However, research this month suggests that hyperbaric oxygen therapy (HBOT), as it is medically known, could be a treatment for dementia. 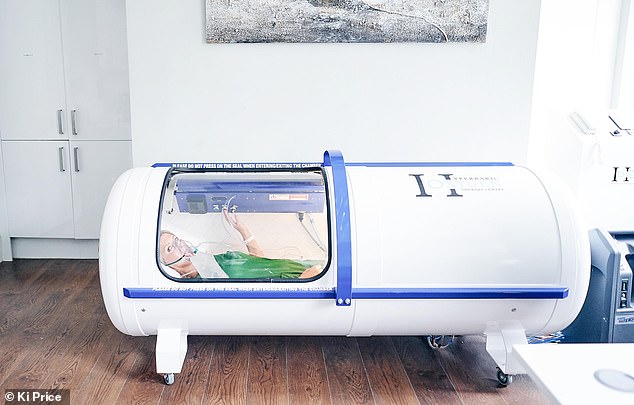 The study, published in the journal Aging, found that when elderly patients with mild cognitive impairment — an early sign of dementia — had 90-minute sessions of the therapy five days a week for three months, they had improved memory and brain function.

Although the study was small, with just six patients, scientists from Tel Aviv University in Israel who carried out the research, say it could become a treatment for Alzheimer’s disease, delaying or even reversing the condition. It is thought to help by improving blood flow to the brain.

HBOT allows more oxygen to be absorbed into the bloodstream and tissues. This helps to reduce inflammation and encourages new blood vessels to grow, stimulating the body’s healing response.

Normally, oxygen is transported around the body by haemoglobin, a protein found in red blood cells that delivers it to organs and cells. But there is a maximum to how much it can transport; each haemoglobin can bond with four oxygen molecules.

When you breathe in pure oxygen at a pressure the equivalent of 14 m (45 ft) under water, or 2.4 times higher than normal atmospheric pressure, it has been proven that rather than just red blood cells carrying oxygen, the blood plasma (the liquid part of blood) also absorbs large amounts of oxygen, allowing the whole body to absorb much more.

In patients with dementia, this is thought to change the structure of blood vessels in the brain, and encourages new vessels to form, so more blood can get through.

Results from the trial showed blood flow to the brain increased by 16 to 23 per cent after the treatment, while memory test scores improved by 16.5 per cent, attention spans by 6 per cent and information processing speed was boosted by 10.3 per cent on average compared with measurements taken before the treatment. 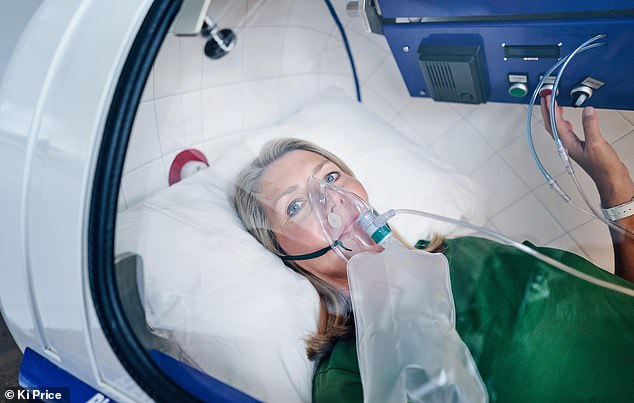 Research this month suggests that hyperbaric oxygen therapy (HBOT), as it is medically known, could be a treatment for dementia

While this research is still in the early stages, HBOT is already used to treat conditions ranging from hard-to-treat leg ulcers to damage caused by radiotherapy.

There are seven NHS centres that offer it; it is also available privately and via charity-funded chambers. Some are single-person chambers which you lie in, and breathe in the pressurised air around you, while others can take around eight people and patients have to wear a face mask.

A typical treatment lasts two hours — a course is usually 40 sessions, carried out five days a week, costing around £8,000.

There are however only two conditions for which HBOT is approved for use on the NHS —the treatment of decompression sickness or ‘the bends’ in scuba divers, and gas embolisms, where bubbles of air or other gases are introduced into the patient’s bloodstream by mistake, either during surgery or by an intravenous line being taken out the wrong way.

These bubbles can travel to the heart and the brain, and cause stroke-like symptoms which can be fatal.

‘The majority of gas embolism cases are unfortunately related to medical procedures,’ says Dr Pieter Bothma, a consultant in anaesthesia and intensive care at James Paget University Hospitals, Norfolk, who is also medical director of the hyperbaric chamber at Whipps Cross Hospital, London. He says they are often caused by accidents or mismanagement of the central venous line — a tube placed in a major vein during surgery or in intensive care to supply patients with medicine, fluids or blood.

He says a CT scan can diagnose a gas embolism and if administered quickly (within hours), hyperbaric therapy can treat this condition successfully, and adds that: ‘Many cases are not identified because clinicians forget or may be unaware that gas embolisms are a cause of stroke.’ Apart from these two ‘approved’ uses, there are others for which there is strong evidence, including wound healing and diabetic foot ulcers, says Dr Bothma.

‘Even with best practice treatment, diabetic ulcers are difficult to heal because of problems with blood supply to the area and can lead to amputations,’ he explains.

‘When hyperbaric treatment is given in addition, the outcomes are much better. This approach has been accepted internationally, but Public Health England says more research is required, so NHS patients will struggle to get it.’

A review of 11 studies, published in the Journal of Vascular Surgery last year, found the addition of hyperbaric oxygen therapy for diabetic foot ulcers led to ‘significantly fewer amputations’. Damage caused by radiation treatment can also be treated with hyperbaric therapy.

‘Although modern radiotherapy for cancer is much more precise than it used to be, healthy tissue can still be injured,’ says Dr Bothma.

This is the case with prostate cancer, where the treatment can damage the bowel or bladder, and radiation of head and neck cancers can lead to radiation of tooth sockets and fractures of the jaw.’

In skilled hands HBOT is ‘very safe’ adds Dr Bothma, but it is unsuitable for those with ‘advanced obstructive pulmonary disease, severe uncontrolled asthma and heart conditions’.

‘There is good evidence to show hyperbaric therapy helps with the repair of these tissues damaged by radiotherapy, but again, Public Health England has indicated they require studies with larger numbers of patients to convince them to approve it.’

The NHS hyperbaric units have agreed to treat these patients on a compassionate basis where possible and collect data for research.

Last year, the Israeli team that carried out the latest research into dementia, found that hyperbaric therapy can also reverse the ageing process. It lengthens the telomeres — the protective caps at the end of chromosomes — by 20 per cent; shorter telomeres mean that when cells divide, they are more prone to faults.

Another study in Israel has trialled the therapy as a way to manage chronic pain caused by fibromyalgia.

Experts think fibromyalgia is triggered by abnormalities in the brain that change the way pain messages are carried; it is thought pushing more oxygen into the bloodstream may improve this.

Recently, it has even been suggested as a treatment for Covid.

However, Dr Bothma warns ‘patients shouldn’t spend money on hyperbaric oxygen therapy where it is not proven — for conditions such as long Covid, cancer, stress, Alzheimer’s and ageing’.

As for dementia, experts say it’s too early to tell if HBOT will be useful. ‘To date, there has been mixed evidence about whether this therapy could hold potential,’ says Dr Susan Kohlhaas, director of research at Alzheimer’s Research UK. ‘Larger scale trials with more people are needed.’