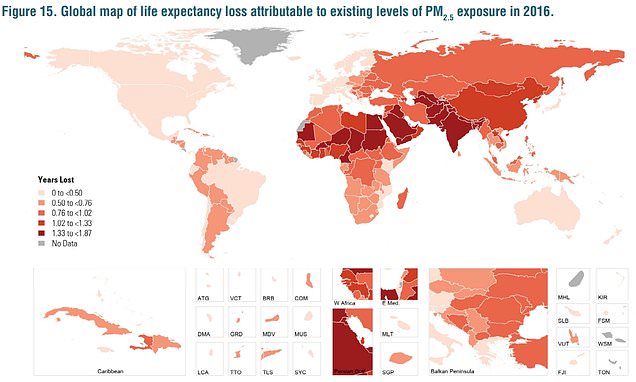 Toxic air will shorten children’s lives by almost TWO YEARS on average, study predicts as experts call for action to cut down on wood fuels and traffic pollution

Children born today will lose nearly two years of their lives, on average, because of air pollution, a study has claimed.

Breathing toxic air is known to damage the lungs, heart and brain and is a serious health concern for millions of people around the world.

A study published today estimates children born in 2019 will lose around 20 months of life because of pollution.

Poorer children in South Asia will be worst affected, with their life expectancies cut up to 30 months short.

But children in wealthier countries will suffer the consequences, too, with those in North America still likely to lose around 20 weeks.

Global children’s charity UNICEF has called for action around the globe to protect youngsters from the pollution, which often comes from cooking fires and traffic. 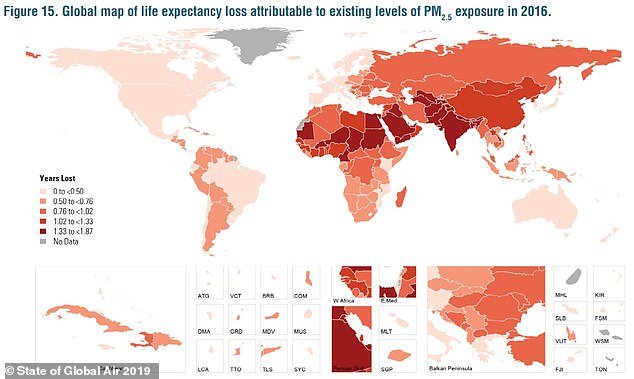 A map in the report showed more developed countries in North America, Europe and Australia come off best, while those in northern Africa and south Asia are likely to lose the most of their lives as a result of toxic air pollution

The State of Global Air report was published by the US-based Health Effects Institute and the University of British Columbia today.

It reveals air pollution is the fifth leading cause of premature death worldwide – responsible for more deaths than malaria, road accidents, malnutrition or alcohol.

But it warned the crisis does not affect all people equally, with those in South Asia – countries including India, Bangladesh and Pakistan – are worst off.

Damaging pollution is produced by people burning wood and coal indoors to cook on and heat or light their homes, as well as traffic fumes and smoke from factories and machines.

Smoke and fumes contain heavy metals, carbon particles and toxic gases which are damaging to human tissue and can be absorbed into heart, lung and brain tissue.

This can raise the risk of various cancers, heart disease, and lung diseases, infections and chronic problems like asthma.

The Health Effects Institute’s vice-president, Robert O’Keefe, told The Guardian: ‘That the life of children is being shortened so much came as really quite a shock.

‘There is no magic bullet but governments should be taking action.’

In East Asia children’s lives could be shortened by an estimated 23 months, the study claimed.

Whereas in developed parts of the Asia Pacific this could be just 20 weeks.

The UK’s air pollution was labelled a ‘national embarrassment’ in September.

Figures for 2017 showed 37 out of 43 air quality zones across the UK had illegal levels of nitrogen dioxide pollution, the same number as the previous year.

Annual average levels of the pollutant from exhaust fumes fell in most places, figures from the Government and environmental law charity ClientEarth revealed.

But levels are still more than double the legal limit in Greater London and also well over the limit in areas including South Wales, West Midlands, Glasgow and Greater Manchester.

Brighton, Worthing and Littlehampton in West Sussex – an area declared as legal in the previous year – crept up to just below the threshold again, the statistics show.

The UK has been breaching EU pollution limits for nitrogen dioxide, much of which comes from diesel vehicles, since the rules came into effect in 2010.

Air pollution causes an estimated 40,000 premature deaths a year in the UK and is linked to health problems from childhood illnesses to heart disease and even dementia.

The top five countries with the highest number of deaths due to air pollution were China, India, Pakistan, Indonesia and Bangladesh.

Countries in North America and Europe, and Australia, New Zealand and Brazil, are likely to lose less than six months of life because of air pollution.

In total, the report says 147 million years of healthy life were lost in 2017 because of toxic air.

The report said if pollution levels were brought within World Health Organization guidelines lives could be lengthened again.

India, Nigeria, and Pakistan would also all see average life expectancy increase by around one year.

China suffers from the most pollution-related deaths, with 852,000 in 2017, the researchers found.

Nearly half of the world´s population is exposed to household air pollution – that caused by burning fuels inside.

It is most common in sub-Saharan Africa and south and east Asia – it affects an estimated 846 million people in India and 452 million in China.

A study last October from the World Health Organization found that exposure to toxic air both indoors and out kills some 600,000 children under the age of 15 each year.

It found that children are often more vulnerable to the impact of air pollution since they breathe more rapidly than adults, and thus absorb more pollutants at a time when their brains and bodies are still developing.

Data from the UN health body said that, every day, 93 per cent of children under the age of 15 breath dangerously polluted air.

Alastair Harper, a spokesperson for UNICEF, told The Guardian: ‘It’s clear with better monitoring of global pollution data we will improve our understanding of the issue and how we can tackle it. The damage to children’s health is happening right now.’