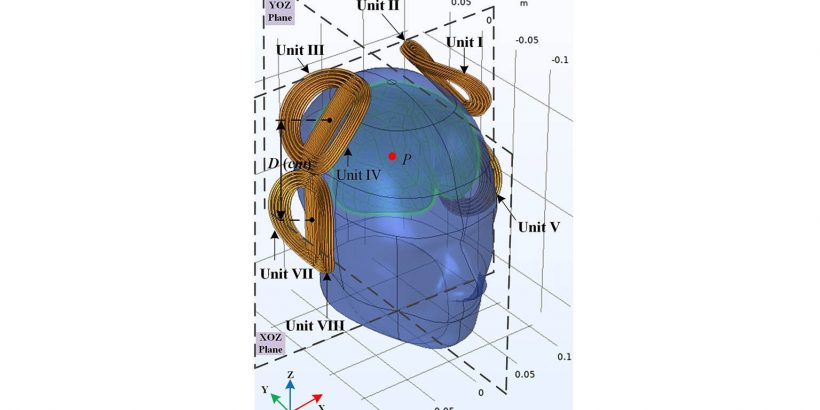 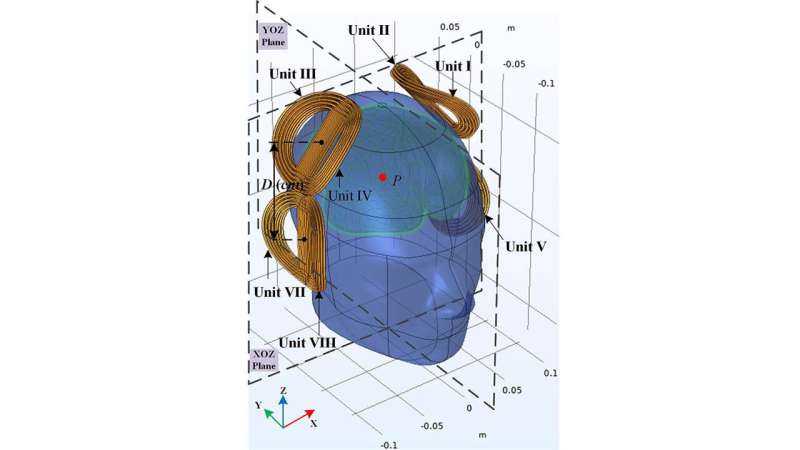 Stimulating the deep brain helps researchers explore the causes of and possible treatments for psychiatric diseases, but current methods don’t go quite deep enough and are largely restricted to superficial targets within the brain.

In AIP Advances, a group of researchers in China from Chengdu University of Technology and Huazhong University of Science and Technology present a new TMS array with a special geometrically shaped magnet structure to help stimulate deeper tissue within the brain.

“Considering the approximate spherical structure of the human head, I wondered if specially shaped coils could be more advantageous than flat coils,” said Xiao Fang, a co-author who has worked on TMS for nearly eight years.

Inside the brain, external stimuli transmit information through neurons with electrical and chemical signals.

“Deep-brain stimulation taps into the penetrating ability of an electromagnetic field or signal to target the membrane potential of deep brain neurons and change the polarization or depolarization effect to achieve neuromodulation,” said Fang.

“It enables focalized stimulation within the deep brain so fewer untargeted tissues are exposed to strong stimulation,” said Fang. “And the location of the stimulation target generated by the array can be flexibly and continuously adjusted.”

“That is 1.67 times deeper than conventional planar stimulation arrays when producing the same focusing area, which effectively improves the stimulation effect,” Fang said.

The group’s design is mainly intended for deep-brain stimulation, such as the treatment of major depression, and its target area is the ventromedial prefrontal cortex region located 7 centimeters beneath the human scalp.

The article, “Noninvasive focalized stimulation in deep brain using the spatially symmetric array,” was published in AIP Advances on Nov. 29, 2022.