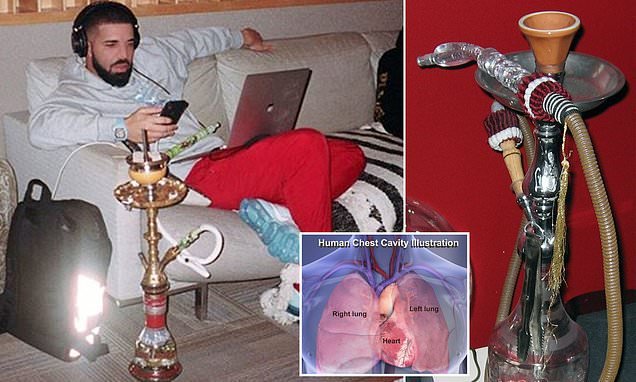 The American Heart Association has published a statement that warns inhaling tobacco via waterpipes – also known as hookahs – for just half-an-hour causes users to take in more carbon monoxide than smoking a cigarette.

Carbon monoxide has been linked to severe heart and blood vessel damage, as well as a reduced ability to exercise.

‘Hubble bubble smoking’ may also expose users to higher levels of nicotine, lead and even arsenic than cigarettes. 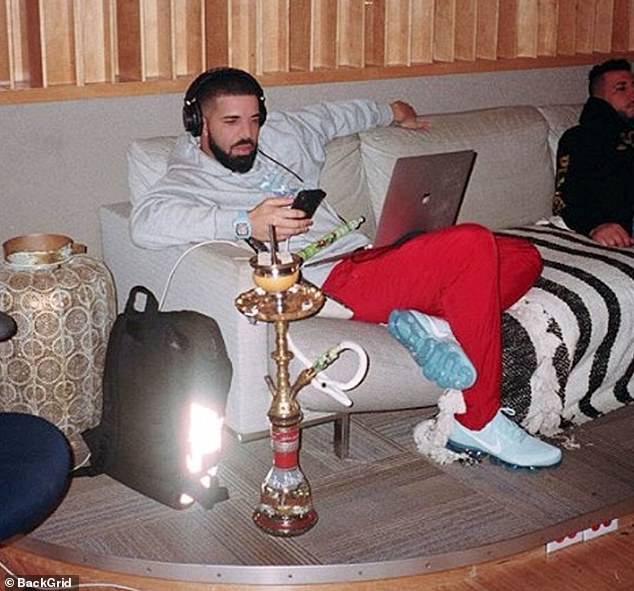 The Canadian rapper Drake is thought to be a fan of shisha smoking after he was snapped on Instagram indulging in a hookah pipe. But scientists have warned hubble bubble smoking may be seriously damaging the Hot Line Bling singer’s heart, blood vessels and ability to exercise 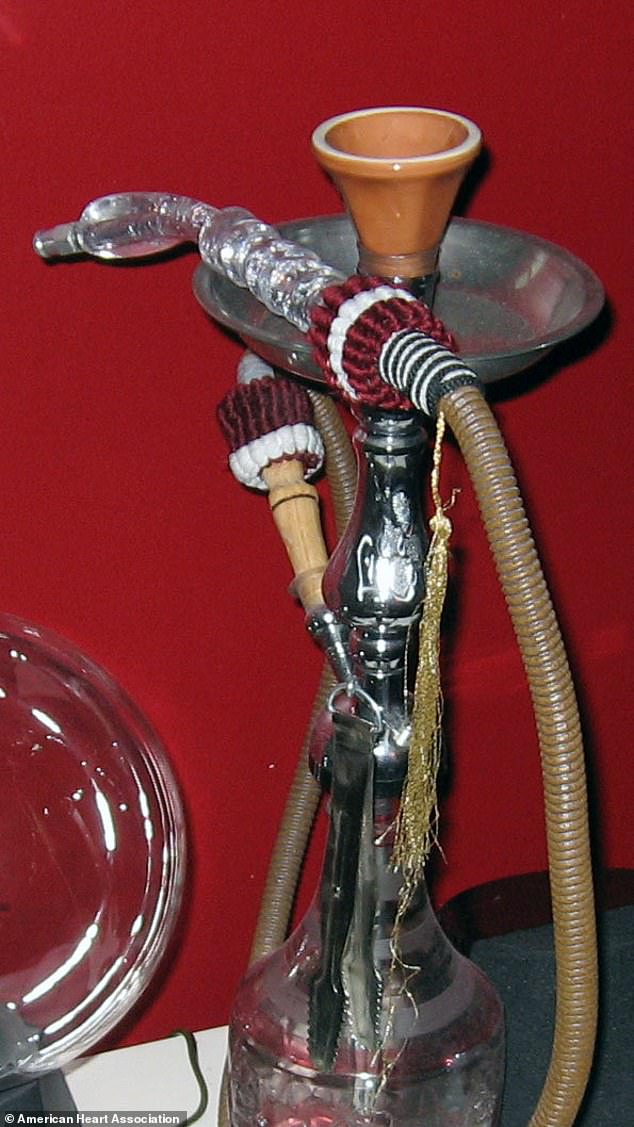 Shisha usually consists of a bowl that holds tobacco and is attached to hose that leads from a body of water to a mouthpiece (pictured). The tobacco is often flavoured with dried fruit 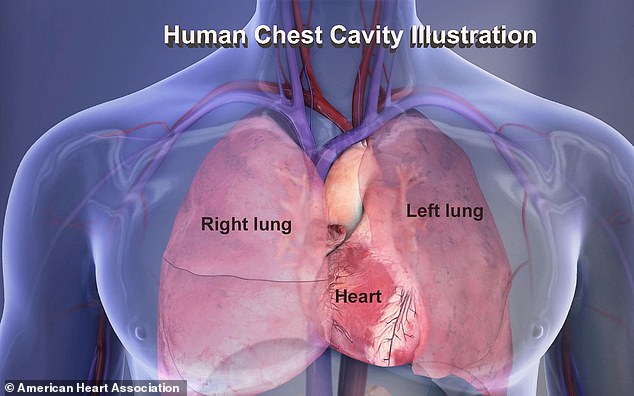 Smoking shisha causes the release of toxins, including carbon monoxide and heavy metals. These reduce the heart’s ability to pump oxygen from the lungs around the user’s body

The statement comes from experts chaired by Dr Aruni Bhatnagar at the University of Louisville Diabetes and Obesity Center in Kentucky.

‘Hookah smoke contains harmful substances and the American Heart Association strongly recommends avoiding the use of tobacco in any form,’ Dr Bhatnagar said.

‘Many young people mistakenly believe that smoking tobacco from a hookah is less harmful than cigarette smoking because the tobacco if filtered through water, but there is no scientific evidence that supports that claim.

‘However, there is evidence to suggest that hookah smoking is addictive and can lead to the use of other tobacco products such as cigarettes.’

Shisha usually consists of a bowl that holds tobacco and is attached to hose that leads from a body of water to a mouthpiece.

Unlike cigarettes, hookah tobacco includes flavours and sweeteners, such as dried fruit or molasses sugar.

Wood, coal or charcoal is burned in the shisha pipe to heat the tobacco and create the smoke. This is required because the fruit syrup or sugar makes the tobacco damp.

During a typical half-an-hour session, hookah users inhale many litres of smoke filled with tiny particulates, which exposes them to higher levels of carbon monoxide than cigarettes.

These cancer-causing substances reduce the heart’s ability to pump blood around the body, raising the risk of cardiovascular disease.

‘[As well as] 2.5 times greater levels of phenanthrene and 11-fold higher levels of carbon monoxide than cigarettes.’

Research even suggests an hour of hubble bubble smoking exposes users to the same amount of smoke as 100 cigarettes. 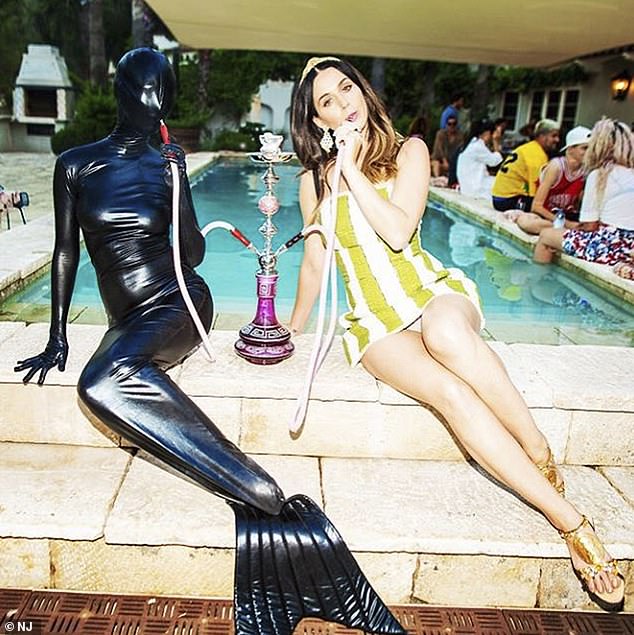 Katy Perry has also been snapped smoking shisha. Experts have warned the habit exposes users to more carbon monoxide than a cigarette, as well as greater levels of lead and arsenic

These flavours and sweeteners help to mask the taste of the tobacco, which may make it easier to inhale and dupe users into thinking they are not doing much damage.

Unlike cigarettes, shisha is often sold in colourful packaging, which may also attract a young audience.

Smoking hookah in lounges and cafés also turns it into a social activity, rather than an everyday habit.

Most importantly, much of the tobacco marketed to shisha users does not carry a health warning.

‘The use of water pipes among adults may be influenced by misperceptions about its addictiveness and health risks, particularly among younger adults,’ Dr Bhatnagar said.

‘For example, some users perceive that the probability of addiction is low if the product is used occasionally and most users believe that they can easily quit water pipe smoking

‘There is evidence, however, that adolescent water pipe users begin exhibiting signs of dependence relatively quickly, less than one year after their first use, and when smoking only occasionally.’

The scientists’ warning comes after a survey revealed 4.8 per cent of US secondary school students and 13.6 per cent of those aged 18-to-24 have tried hookah.

Past research further suggests those who have tried waterpipes are more likely to turn to cigarettes in the future.

Hookah is even becoming increasingly popular in its native Middle East, with up to 15 per cent of residents inhaling the flavoured tobacco.

The scientists want to see the damaging effects of shisha communicated to the public.

They are also encouraging doctors and other healthcare professionals to ask patients about their hookah use and give them tools to help them quit. 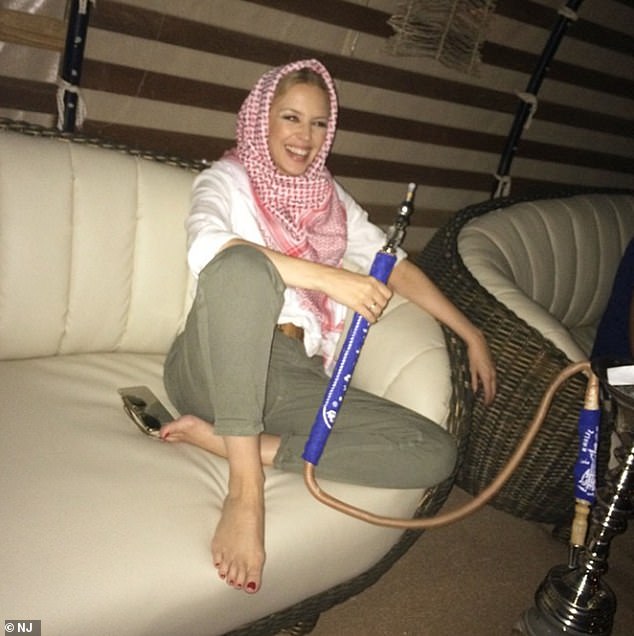 Kylie Minogue (pictured) is also thought to be a fan, despite the severe risks involved

Hookah is an ancient form of smoking, also called narghile, waterpipe, or hubble bubble smoking, which uses charcoal-heated tobacco or non-tobacco based shisha smoke which is passed through water before inhalation. 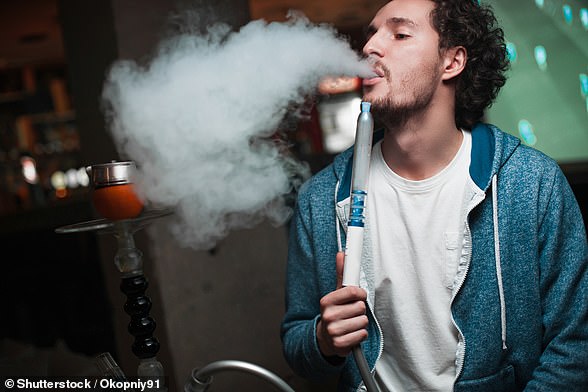 People who inhaled the sweet-smelling fumes of ‘hookah’ smoke were more likely to gain weight and develop type 2 diabetes in comparison to those who didn’t or who smoked cigarettes, a study of almost 10,000 Iranians by the Brighton and Sussex Medical School found

It is often seen as less toxic compared to cigarettes, alongside e-cigarettes and vaping.

The sweet flavours available make shisha smoking desirable, especially the young people – around half the smoking teenagers do is in this way.

Hookah smokers can spend long periods of time in lounges and bars inhaling the fumes.

A typical hookah session lasting one hour involves 200 puffs, which results in 90,000 milliliters of smoke being inhaled.

Smoking a cigarette involves 20 puffs, resulting in 500-600 milliliters of smoke being inhaled, according to the Centers for Disease Control and Prevention.