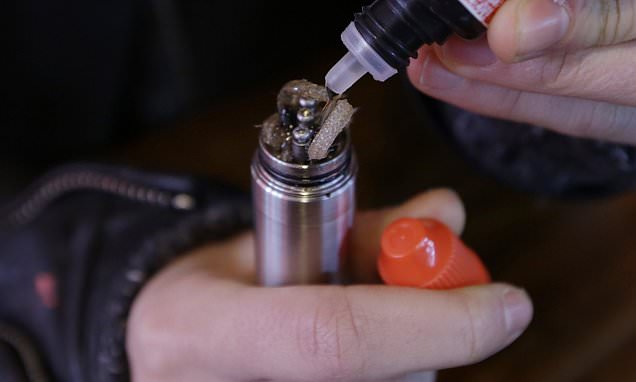 Two of the most popular e-cigarettes flavors are so damaging to cells they could destroy the lung function of vapers, a Harvard study warns.

It means people who use these flavors may be more susceptible to lung diseases such as chronic obstructive pulmonary disease (COPD) and asthma.

Scientists at Harvard TH Chan School of Public Health found the chemicals diacetyl and 2,3-pentandione may impair the function of cilia in the human airway. 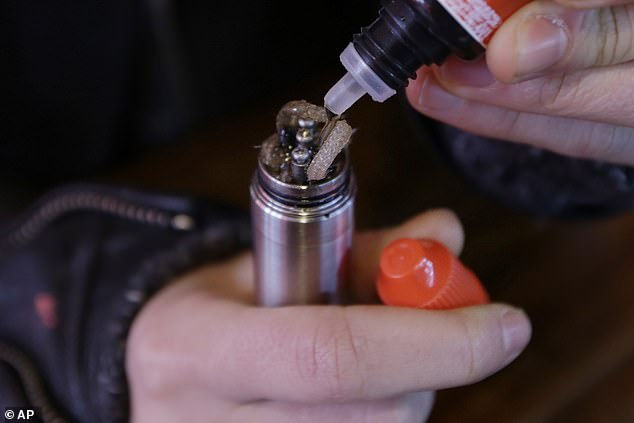 Researchers found that even low levels of both chemicals affected gene expression, suggesting that current standards for safe limits of exposure to these chemicals for workers may not be sufficient

Cilia are antennae-like protuberances that are present on 50 to 75 percent of the cells that line human airways.

They play a key role in keeping the human airway clear of mucus and dirt and allow people to breathe easily and without irritation.

The study was the first to look at the impact of flavouring chemicals in human epithelial cells, which are the type that line the lungs.

And they said while food processing workers are warned not to inhale the chemical flavors because they have been linked to ‘popcorn lung’ lung disease vapers are not.

Associate professor of environmental genetics and pathophysiology Quan Lu said: ‘Although chemicals used to flavor e-cigarettes are frequently used, little has been known about the mechanism of how they impact health.

‘Our new study suggests that these chemicals may be harming cilia – the first line of defense in the lungs – by altering gene expression related to cilia production and function.’

But scientific studies examining the potential health effects of e-cigarettes and their myriad chemical components have not kept pace with the rise in use.

In a previous study Assistant Professor of exposure assessment science Joseph Allen and Harvard Chan colleagues found flavoring chemicals, primarily diacetyl and 2,3-pentanedione, were in over 90 percent of e-cigarettes they tested.

Diacetyl is also used as a flavoring agent in foods such as butter-flavored microwave popcorn, baked goods, and sweets.

It can create a variety of flavors and is considered a safe ingredient in foods, but evidence suggests that it can be dangerous when inhaled.

It has been previously linked with bronchiolitis obliterans, a debilitating lung disease that was dubbed ‘popcorn lung’ because it first appeared in workers who inhaled artificial butter flavor in microwave popcorn processing facilities.

After the link between diacetyl and popcorn lung was reported, 2,3-pentanedione was sometimes used as a substitute.

In the new study, the scientists used novel lab techniques that allowed them to examine the impact of both diacetyl and 2,3-pentanedione on epithelial cells in a system that closely mimicked the human airway epithelium in vivo.

They exposed normal human bronchial epithelial (NHBE) cells to the chemicals for 24 hours.

They found that both diacetyl and 2,3-pentanedione were linked with changes in gene expression that could impair both the production and function of cilia.

Researchers also found that even low levels of both chemicals affected gene expression, suggesting that current standards for safe limits of exposure to these chemicals for workers may not be sufficient.

Yet there are no such standards for e-cigarette users.

‘Although some e-cig manufacturers are stating that they do not use diacetyl or 2,3-pentandione, it begs an important question – what chemicals, then, are they using for flavoring?

The study was published in the journal Scientific Reports.