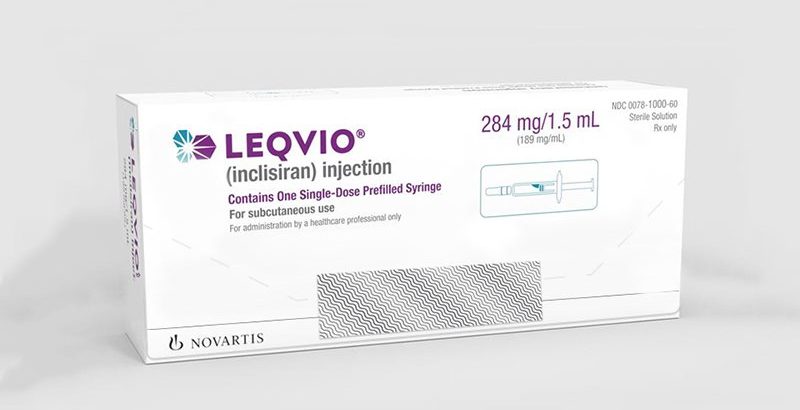 The active ingredient of inclisiran (Leqvio) is a small interfering RNA (siRNA) molecule that shuts down production of the PCSK9 (proprotein convertase subtilisin/kexin type 9) protein, an enzyme that’s made and functions primarily in the liver and degrades cellular receptors for LDL cholesterol. Inhibiting PCSK9 production means LDL-cholesterol receptors accumulate and boost the ability of liver cells to pull more LDL cholesterol out of blood.

PCSK9 inhibition is the most potent LDL-cholesterol lowering method now available, and it works well in patients who have maxed out LDL reduction by diet and statin treatment. The siRNA of inclisiran is tweaked to target the molecule to the surface of liver cells following subcutaneous injection. Other modifications of the siRNA give it stability that allows twice-a-year dosing, although patients receive a third injection during their first year to hasten a maximum treatment effect.

Inclisiran’s FDA approval relied on results from three pivotal trials that together enrolled 3,660 patients with either atherosclerotic cardiovascular disease (ASCVD), ASCVD risk equivalents, or heterozygous familial hypercholesterolemia (HeFH), and LDL-cholesterol levels of at least 70 mg/dL in those with established ASCVD, or at least 100 mg/dL in other patients. (HeFH and ASCVD are the drug’s approved indications.) Pooled data from the three trials showed that inclisiran was safe and well tolerated during 18 months and produced an average LDL-cholesterol reduction after 510 days (1.4 years) of about 51% compared to baseline after correction for placebo effects (J Am Coll Cardiol. 2021 Mar 9;77 [9]:1182-93).

These data showed inclisiran was about as safe and effective for reducing LDL-cholesterol as agents from another class of PCSK9 inhibitors that rely on injected antibodies to inactivate PCSK9. Two agents from this class, alirocumab (Praluent) and evolocumab (Repatha), both came on the U.S. market in 2015. Although their performance in routine practice during the ensuing 6-plus years has been as safe and effective as what they showed in their respective registration trials, they have faced a rocky uptake road that’s been primarily hindered by the hefty price tag that both drugs carry.

When they first came out, evolocumab and alirocumab were burdened by annual drug costs of roughly $14,000, a fact that led to widespread prior-authorization and copay barriers set up by U.S. insurers. Although these barriers gradually lessened over time, in part aided by a substantial price cut for both drugs that led to annual drug costs more in the range of $6,000/year, they remain relatively pricey and are still not easy to start in patients because of prior-authorization requirements, said clinicians.

Recent penetration of the older PCSK9 inhibitors into eligible U.S. patients “is only about 1%-2%, based on the latest data,” said Michael H. Davidson, MD, a lipid specialist and director of Preventive Cardiology at the University of Chicago.

“We have these great, effective drugs, but they haven’t really made an impact over the past 5 years,” because of very limited uptake, a situation Davidson called “very disappointing,” during an interview.

Given this recent history, inclisiran, another expensive PCSK9 inhibitor, may face similar coverage pushback as it hits the U.S. market with a retail price, announced by its manufacturer Novartis, of $3,250/dose. This means that patients who start the drug and receive their initial dose, a second dose after 3 months, and then additional doses every 6 months, rack up a drug cost of close to $10,000 the first year on the drug and $6,500 each subsequent year.

This treatment schedule highlights the major logistical difference that distinguishes inclisiran from the antibody-based PCSK9 inhibitors, which are given by repeated subcutaneous injection every 2 or 4 weeks, usually with patients self-injecting the drugs at home. The less-frequent dosing schedule for inclisiran prompted the drug’s developers to schedule injections by a clinician in an office setting in the pivotal trials, which led to labeling for inclisiran that specifies administration only by a health care professional.

This difference in drug administration between inclisiran and the antibody-based PCSK9 inhibitors set up Novartis to promote insurance reimbursement for inclisiran using a “buy-and-bill” paradigm that was first developed for oncology drugs and which may provide a loophole around the prior-authorization roadblocks that hindered early uptake of the antibody-based PCSK9 inhibitors.

It’s also an approach that has made U.S. clinicians unsure how it will play out in practice. Infrequent inclisiran dosing may also boost patient compliance.

“Adherence is the greatest challenge in preventive cardiology, and thus inclisiran has the potential to be a game changer,” commented Christie M. Ballantyne, MD, professor and chief of cardiology at Baylor College of Medicine, Houston.

Although the prior-authorization hoops for evolocumab and alirocumab have become easier to jump through, “most physicians don’t have the resources to handle it and don’t bother,” noted Davidson, and he’s concerned that infrastructure challenges will also hamper the buy-and-bill strategy for inclisiran.

He also expressed skepticism that the prior-authorization barrier will disappear. “Payers don’t want to open a large population to a very expensive drug without some gatekeeping,” he said, while acknowledging that in late January 2022 he did not yet have personal experience administering inclisiran or navigating its insurance reimbursement.

Davidson agreed that the prospect for enhanced patient compliance with inclisiran was intriguing and had already drawn the interest of some of his patients.

“There is a lot of appeal” to a treatment that’s only given once every 6 months, he said. “Compliance is a major issue, and this is less work for patients.”

“The biggest possible attraction of inclisiran is that it is given twice a year, but whether this plays out as anticipated in the real world need to be seen,” cautioned Vijay Nambi, MD, a cardiologist at the Michael E. DeBakey VA Hospital, Houston, and at Baylor College of Medicine who has written about inclisiran. He noted that while two doses a year is “on paper very attractive,” this scheme opens the door to missed or delayed appointments because of vacations, other patient travel, or events like a pandemic.

“The biggest pro for inclisiran is the dosing schedule,” said Chandni Bardolia, PharmD, a drug information specialist at Tabula Rasa Healthcare, Moorestown, N.J., who has analyzed and written about inclisiran and other lipid-lowering medications. “Twice yearly dosing following initiation will be a huge benefit to improve adherence and reduce the number of injections.”

However, inclisiran’s attractive dosing schedule as well as its safety and potent efficacy do not tell the whole story, she highlighted in an interview.

“I see inclisiran as a last-line drug, mainly because the current alternatives have more safety and efficacy data,” Bardolia said.

Inclisiran’s “cost and the fact that there are other agents with clinical outcome data already available [alirocumab and evolocumab] means inclisiran is not a first-line agent after statins,” agreed Nambi.

The FDA based its inclisiran approval entirely on the drug’s demonstrated safety and LDL-lowering efficacy. The cardiovascular outcomes trial for inclisiran, ORION-4, with about 15,000 enrolled patients, started in 2018 and remains in progress with full results expected in 2026.

The lack of clinical outcomes data for inclisiran is a major limitation, said Neil J. Stone, MD, a cardiologist and professor at Northwestern University, Chicago, and vice chair of the panel that wrote the most recent cholesterol guideline for the American College of Cardiology and American Heart Association.

“My greatest concern is the lack of outcome trial data. That’s very important,” Stone said in an interview.

But others minimize this limitation given the overwhelming evidence that links lower levels of LDL-cholesterol to reduced clinical events.

Most clinicians “support lower LDL as a surrogate” for reduced clinical events, “just like blood pressure and hemoglobin A1c,” noted Davidson, although he conceded that a “substantial minority wants to wait to see inclisiran’s outcome benefits.”

It’s All About Price

While opinions are mixed on the need for clinical outcomes data, experts are more uniform in seeing drug prices that run to several thousands per year as the main uptake issue.

“We need to look at the cost-efficacy with inclisiran, and we need benefit data to determine this,” said Stone.

Patient interest in less frequent dosing will be important for driving use, but “ultimately cost will be the most important driving factor,” for inclisiran uptake, commented Robert H. Eckel, MD, an endocrinologist affiliated with the University of Colorado School of Medicine, Aurora.

Davidson has ties to New Amsterdam Pharma and Amgen, which markets evolocumab (Repatha). Ballantyne is a consultant to numerous companies, including Amgen and Regeneron, which market alirocumab (Praluent). Nambi has been a site investigator for studies sponsored by Amgen, and by Merck, which markets the LDL-cholesterol drug ezetimibe (Zetia) and is developing an oral PCSK9 inhibitor (he said that the views he expressed are his own and don’t represent that of the department of Veterans Affairs or Baylor.) Bardolia had no disclosures beyond her employment at Tabula Rasa Healthcare. Stone, Hess, and Eckel had no relevant disclosures.