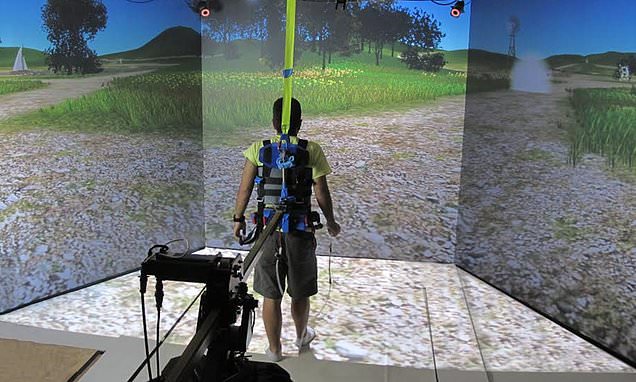 A new virtual reality game has helped Parkinson’s sufferers keep walking without losing their balance, falling or struggling to turn.

Over time, the incurable neurodegenerative disease restricts muscles more and more, limiting a person’s mobility, ability to turn and balance.

But a new technique developed by researchers at the University of Utah restored dynamic movement in 10 patients who trained on the system three times a week for six weeks.

Experts believe the repetitive activity – walking, running and turning on a treadmill as they hop over virtual objects on a cave-like screen in front of them – helped to keep their muscle memory active and ward off deterioration.

‘The primary advantage is that they can encounter multiple obstacles and terrains while a safe environment is maintained using equipment such as a fall restraint tether,’ said K. Bo Foreman, PhD, associate professor and director of the Motion Capture Core Facility at the University of Utah.

‘Participants enjoyed the experience and thought it was fun, not just exercise. They liked training and challenging themselves without the fear of falling.’

The virtual reality experience is projected onto semi-circle-shaped wall facing the patient, who is on a very wide treadmill.

The patient wears a headset, shoes and clothing with sensors on them, and they are tethered to a pole behind them for control.

Some of the tasks seem more straight forward than others – walking straight through a field, for example, rather than jumping up onto the curb of a road.

But the fusion of everything together forces patients to exercise various skills which can quickly become challenging, if not impossible, for people with Parkinson’s.

Once we’ve learned to walk, we become adept at nimbly switching from walking to running, from walking straight forward, to walking diagonally to the right. We can speed up or slow down, and step to the left or right, or up or down.

Researchers are still working to fully understand how Parkinson’s restricts movement and gait. There is evidence that the drop in dopamine levels plays a role.

However, there is growing evidence that physical activity can stave off the decline.

For example, revered actor Alan Alda, who revealed his Parkinson’s diagnosis last summer, has taken up boxing to stay mobile.

Dr Foreman’s team at Utah believe VR, much-hyped for its potential use in clinics, is worth the fan-fare.

‘We are hopeful that this improved performance relates to decreased falls in their everyday life,’ Dr Foreman said.

‘Parkinson’s disease is a progressive disease, and anything we can do to impact the progression is a step in the right direction.’