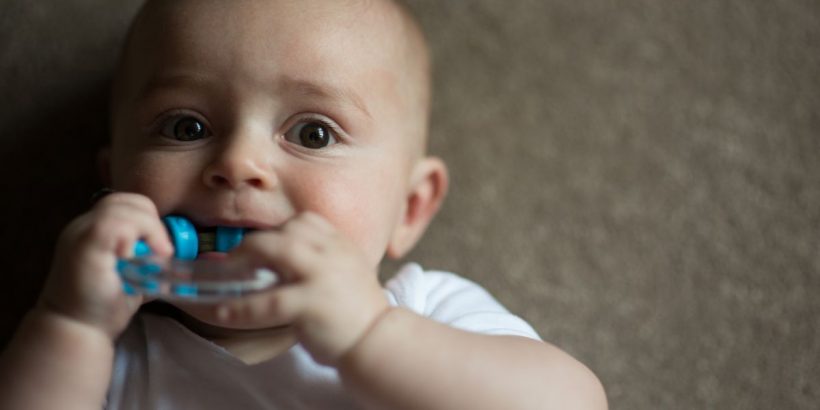 Children’s first teeth form while they are still in the uterus, but it usually takes time for those teeth to come in and emerge from their gums. But which teeth come in first?

The set of teeth that comes in first is usually the same for all children, so parents and carers can have a good idea of what to recognize when the time comes.

Teething can also be an uncomfortable, even painful, process for children, so understanding how teething works and what you can do to help can make the process less stressful for everyone. Although buying the best electric toothbrush for kids is a while off when teeth first start to emerge, learning how to care for primary teeth is essential. In fact, Dr David Rice, from Ignite DD Denal University, tells LiveScience that tooth decay is still the number one childhood disease.

Which teeth come in first?

Rice says that the first teeth to come in are the lower central incisors – these are our bottom two front teeth. While the average age of teething is around six months, some children’s teething patterns will vary. Boys are often slightly ahead of girls when it comes to the timing of their first teeth. Dr Hanna Kinsella, from Kiln Lane Dental, also says that some babies are born with their first teeth, whilst others will start teething at four, or even 12 months. “But the most common time is six months,” he says.

After the first teeth come through, the rest of a child’s primary or milk teeth will gradually make their way through the gums. It’s essential to check with a dentist to keep track of how your child’s teeth are doing. Dr Alina Lee Lane, from All Smiles Dentistry, recommends taking your child to the dentist when they turn one. “Then the dentist can evaluate their primary tooth growth and have the opportunity to educate parents on proper cleaning techniques and diet,” she says.

What are teething symptoms?

Symptoms associated with tooth eruption can vary from irritability to diarrhoea, and from rosy cheeks to drooling.

A study published by the American Academy of Pediatric Dentistry found that gingival reddening (red gums) is expected when teeth start to come through. The authors added that gum swelling around an erupting tooth was possible, but not standard. You may want to check with a dentist to confirm that it’s connected to teething, and isn’t a symptom of another condition.

Other research has found that proteins produced by children’s bodies during the time when they are teething could explain symptoms that are commonly attributed to teething. Sleep disturbances, stomach upsets, and changes in appetite can all be linked to these shifts in protein levels that happen when children’s teeth erupt.

Behavioral changes may even be associated with the stage of development the child is going through when they teethe. Dr Sara Amini explains: “Lots of the systemic problems kids get is because they put a lot of objects in their mouth, so a lot of parents think it’s because of the teething, but they’re teething because of the bacteria introduced to their mouths.” She recommends making sure everything is clean – including their hands – and having something soft that they can chew on close by.

A study published in the Official Journal of the American Academy of Pediatrics found that while some children did experience symptoms in the run-up to a tooth erupting, some were more likely to be coincidental than linked to teething in itself. They did, however, find that children would often experience the same sets of symptoms each time a tooth erupted.

How can you soothe a teething baby?

Once you have established which teeth come in first, there are a whole plethora of methods you can try to soothe babies that are teething. From tried and tested tips that have been passed through generations, to modern gadgets designed to make the process easier for everyone – we’ve gathered some of the best ways below.

Lane recommends massaging the gums with a clean finger to remove pain. Although a baby’s teeth can be sharp, so you might want to consider switching to a different method once more of them come through.

Both Lane and Rice recommend using a cold or lukewarm flannel for children to chew on or placing it on their gums. You can also try other cooling items such as cold teething rings or partially frozen fruits.

If holistic methods aren’t doing the trick, Hussain recommends considering painkillers. “If your baby is in pain, give them sugar-free painkillers such as Tylenol or ibuprofen,” he says.

There are numerous teething gadgets on the market for children to chew or suck on, from innovative pacifiers to sustainable wooden teething aids.

India Bottomley is a health and beauty writer whose work has been published in the likes of Cosmopolitan, Forbes, and Dazed Magazine. A lifelong skincare aficionado, India has been writing research-led pieces on trending skincare, makeup, and cosmetic procedures since 2016. She takes particular interest in the growing connection between tech and beauty, and has had pieces on the topic published in American Healthcare Journal. When not writing she can be found exploring national parks or at the beach chasing sunsets.