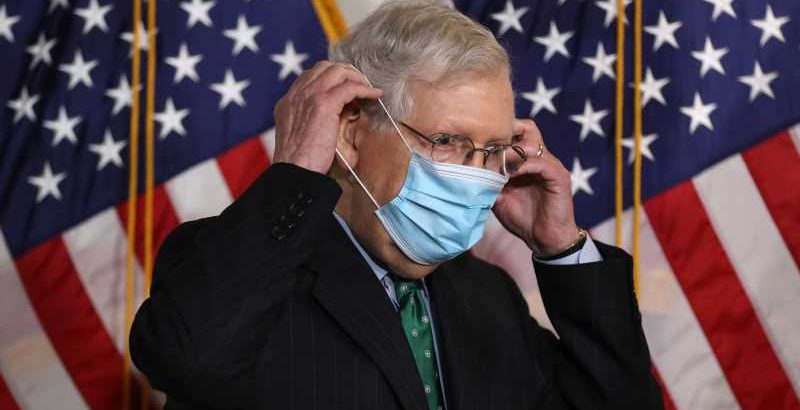 More Washington insiders are being tested for COVID-19. In light of President Trump’s positive diagnosis — and that of First Lady Melania Trump — the Trump kids were tested (all are negative at this time), and it was revealed Trump’s former adviser Kellyanne Conway had tested positive. Chris Christie, a close presidential adviser, has also tested positive. It was also revealed that Amy Coney Barrett, Trump’s choice to replace Ruth Bader Ginsburg for Supreme Court Justice, had tested negative Friday — it’s reported she may have already had the virus previously — but that two Senators on the Judiciary Committee tested positive (via The New York Times).

With all this transparency, it’s sort of puzzling why Senate Majority Leader Mitch McConnell has thus far declined to confirm when he was tested for the virus (via Newsweek). Despite his murky response to questions about his health status, McConnell has decided to delay the Senate’s return given the current Washington outbreak, per The Hill.

“Have I ever been tested? Yes,” McConnell told Lexington Herald-Leader at an event at Georgetown Community Hospital in Kentucky Friday, adding, “I’m not going to answer questions about when. We are following the guidelines that we’ve been given by the CDC.” McConnell added he has not been in close contact with anyone with a positive test result. But Senators Mike Lee of Utah and Thom Tillis of North Carolina — who just tested positive — attended a reportedly maskless nomination event for Barrett just days prior to their diagnosis. It’s not clear how close in proximity McConnell may have been to them, or to Senator Ron Johnson, who also tested positive, per The Hill.

The good news is McConnell is suspending floor activity on Capitol Hill until October 19. Confirmation proceedings for Barrett are expected to continue however, perhaps in part, virtually.