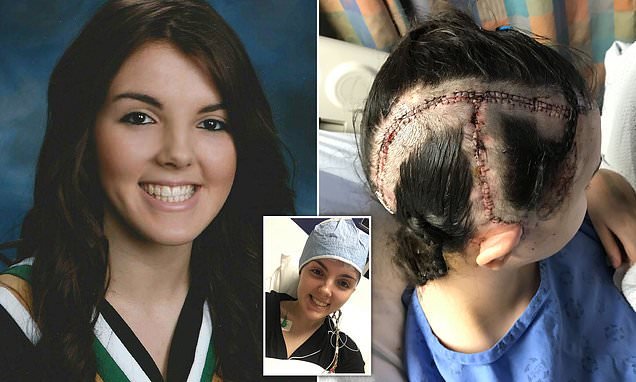 Woman, 24, defies slim odds to survive a brain aneurysm which made her feel like her head was going to EXPLODE and left doctors no choice but to put her in a coma

A woman defied slim odds to survive a brain aneurysm that caused a stroke and made her feel like her head was going to explode at the age of 15.

Chloe Gallagher, now 24, was rushed to hospital when she suddenly lost her vision and was crippled with agonising pain in her head while watching TV at home.

A CT scan showed Miss Gallagher’s brain was ‘full of blood’ after a bulging blood vessel had burst, causing a stroke that can prove fatal.

In emergency surgery, doctors had to cut out a part of Miss Gallagher’s skull the size of a palm to operate before putting her in a coma to help her recover.

Her family, of Ontario, Canada, were told to expect the worst. If she survived, she would be faced with some serious disabilities.

But described as a ‘miracle patient’, Miss Gallagher, who is now a medical student, pulled through with little complications – despite developing epilepsy. 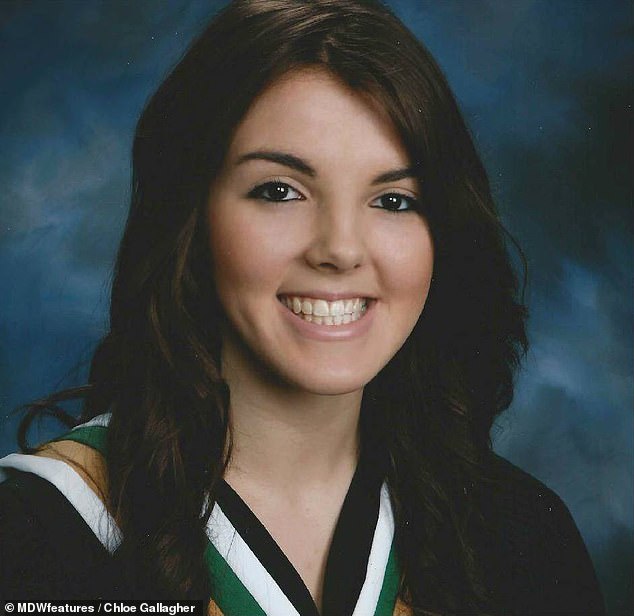 Chloe Gallagher defied slim odds to survive a brain aneurysm that made her feel like her head was going to explode at the age of 15. Pictured after at her graduation 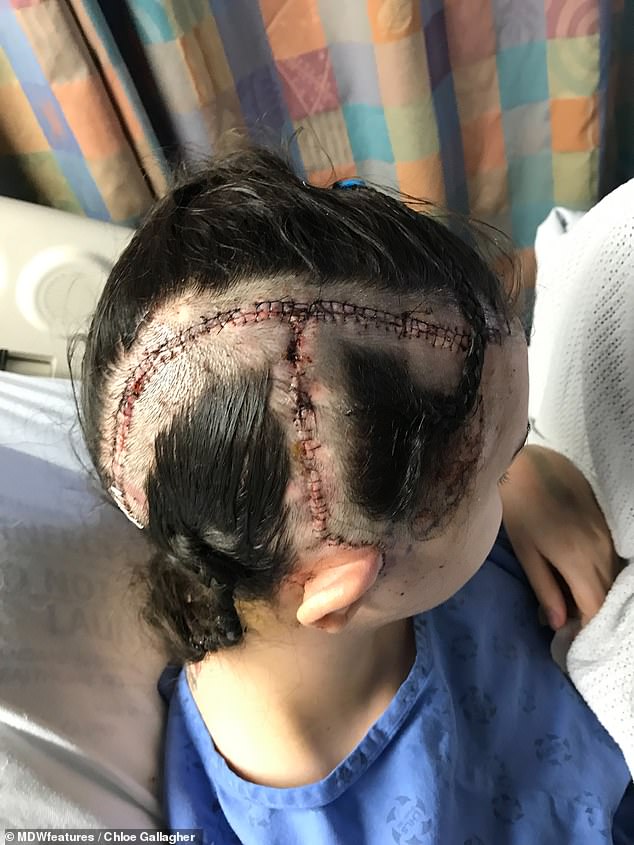 In emergency surgery, doctors had to cut open a part of her skull the size of a palm to operate before Miss Gallagher was put in a coma 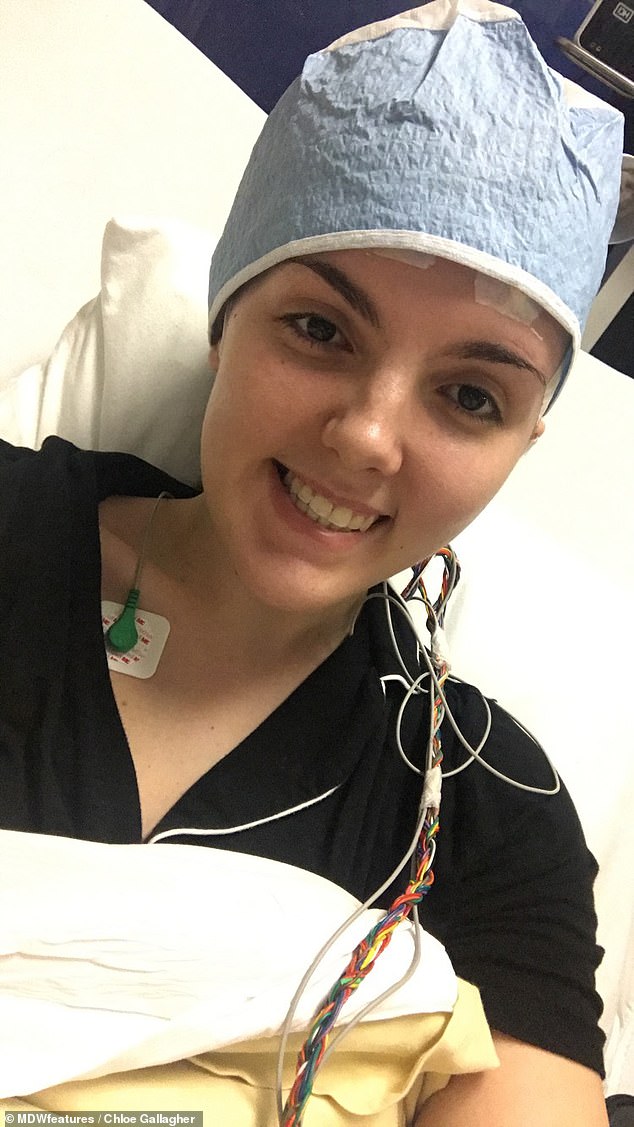 Described as a ‘miracle patient’, Miss Gallagher pulled through despite having to deal with epilepsy and various other operations since

Miss Gallagher said: ‘Before I went into surgery, and into the coma, the doctors told my parents to expect the worst.

‘It was likely I wouldn’t make it, and if I did, I could be a very different person and have some major disabilities.’

In June 2010, Miss Gallagher suddenly felt like her head was going to explode – a sudden sign that a brain aneurysm has ruptured, causing a type of stroke.

As she tried to get out of the bed to get to the kitchen, she fell and realised she couldn’t walk.

She crawled down the hall to the kitchen, confused and terrified, and managed to call her father, whose name is unknown.

Miss Gallagher said: ‘I came home from school that day, did some homework, then was watching TV in my parents’ room and was on my phone texting some friends.

‘I can’t even describe to you the pain I felt that day. I got up to go to the phone in the kitchen since I couldn’t see the screen on my phone, but when I stood up out of the bed, I fell. It was then I realised I couldn’t walk.

‘I realised something was seriously wrong. As I was crawling down the hall to the kitchen, I was trying to figure out what the hell could be happening.’

On his way to her, her father called her brother, Dru, who was nearby. When Dru arrived, he saw Miss Gallagher curled up in a ball on the kitchen floor, screaming in pain.

Miss Gallagher said: ‘I have no idea how, it must have been muscle memory, but I dialled my dad’s phone number. I didn’t know it but at that point I was just screaming. 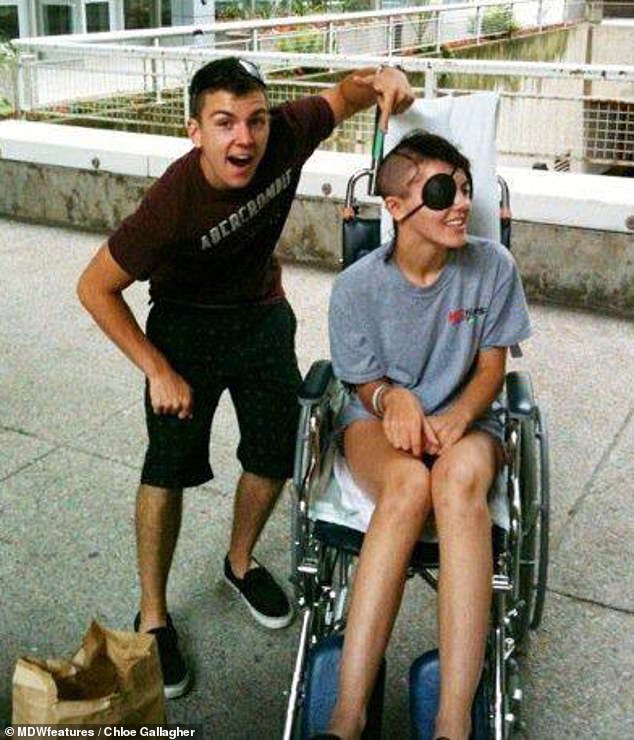 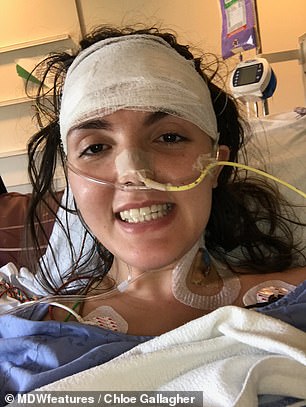 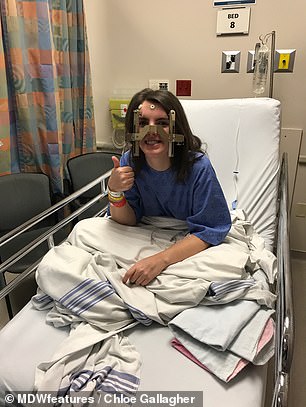 Miss Gallagher was rushed to hospital. A CT scan showed medics that Miss Gallagher’s brain was ‘full of blood’ after as the brain aneurysm, a bulging blood vessel, had burst 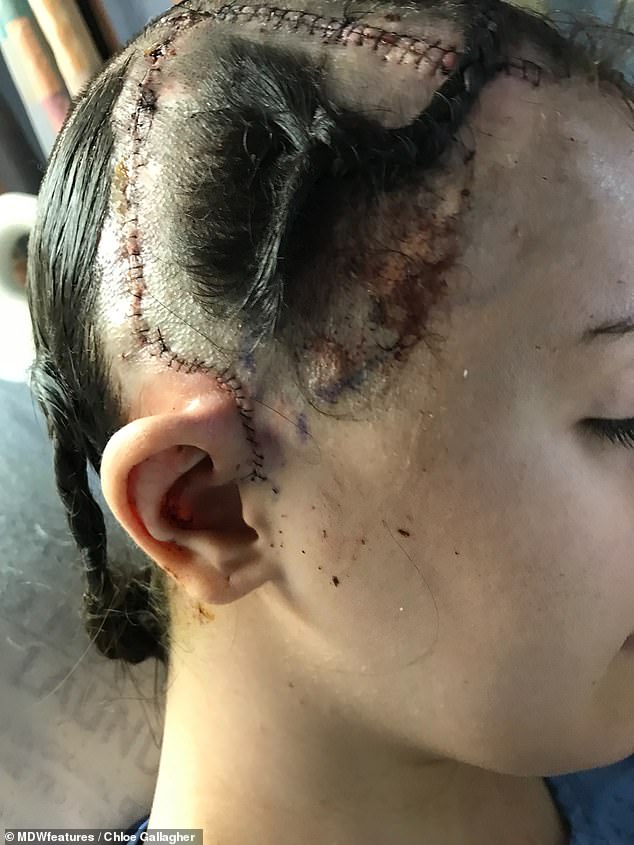 An emergency decompressive craniotomy was performed to relieve the swelling in Miss Gallagher’s brain. Pictured, the scars from where her skull was removed 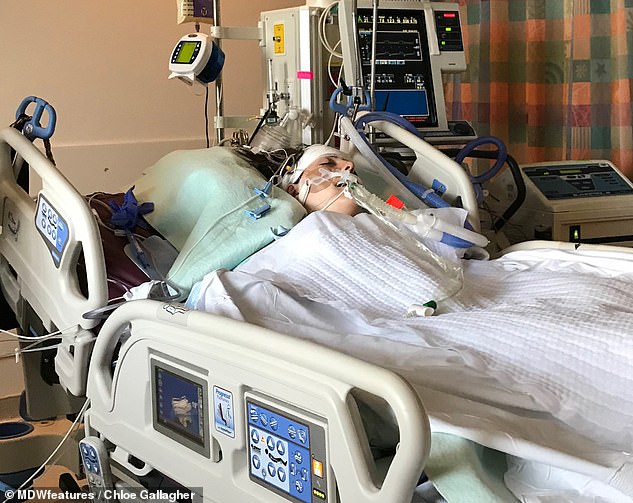 Miss Gallagher had a bone flap in her brain removed that her doctors said was the size of her hand and then put in a three-day coma. Pictured in hospital

WHAT IS A BRAIN ANEURYSM?

A brain aneurysm is a bulge or ballooning blood vessel.

This can leak, causing bleeding in the brain, which can be life threatening.

Symptoms of a ruptured aneurysm include:

An unruptured aneurysm may not have any symptoms and could not require treatment.

The causes of brain aneurysms are often unclear.

Treatment may include surgery or medication to restore blood flow and relieve pain.

‘From this point on, I don’t remember seeing anything, but I remember hearing him [Dru] coming in the door and rushing over to me.

‘Shortly after, I remember hearing my dad walk into the room and they made the decision to just take me to the hospital. That’s the last thing I remember.’

At the hospital emergency room, the doctor immediately recognised that the cause was a ruptured brain aneurysm and a CT scan showed that her brain was ‘full of blood’.

It’s difficult to know exactly how many people are affected by brain aneurysms because they usually cause no symptoms and pass undetected.

It could be as high as one in 20 people, while other experts think the figure is much lower at around one in 100 people, the NHS states.

The number of brain aneurysms – more common in people over the age of 40 – that actually rupture is much smaller. Only around one in 12,500 people have a ruptured brain aneurysm in England each year.

In the US, an estimated one in in 50 people have a brain aneurysm, and about 30,000 people suffer a brain aneurysm rupture each year, according to Brain Aneurysm Foundation.

As she was only 15-years-old at the time, Miss Gallagher was referred to McMaster Children’s Hospital by an ambulance where they then did the emergency decompressive craniotomy to relieve the swelling in her brain.

The surgery removed a bone flap in her brain that her doctor said was the size of her hand and then put in a three-day coma.

Before she was placed into a coma, her doctors told her parents to expect the worst and she was unlikely to make it, even if she did, she would be faced with some serious disabilities.

About three in five people who have a subarachnoid haemorrhage – a stroke caused by bleeding on the brain – die within two weeks, according to the NHS. Half of those who survive are left with severe brain damage and disability. 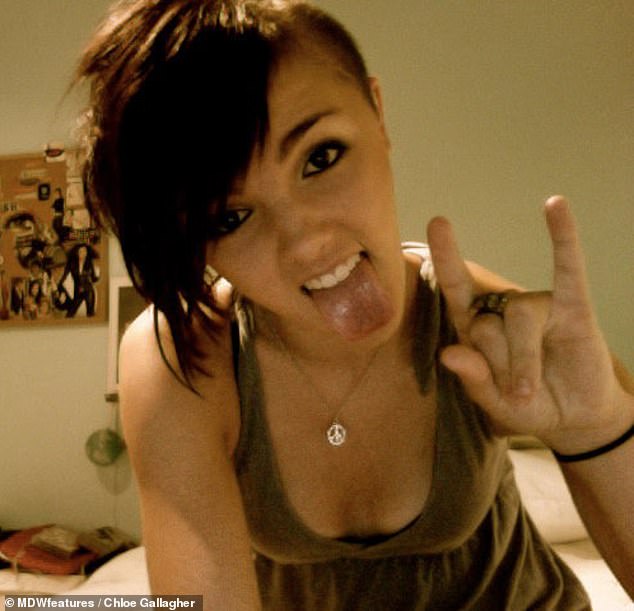 About three in five people who have a subarachnoid haemorrhage die within two weeks, therefore medics called Miss Gallagher, pictured after her surgery, a ‘miracle’ 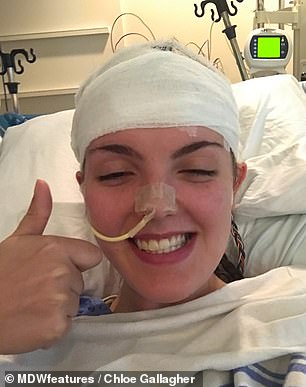 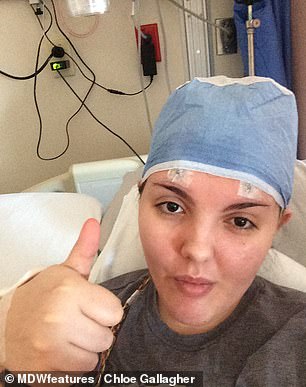 Doctors told Miss Gallagher’s parents to expect the worst and she was unlikely to make it. Pictured, after waking up in hospital

Miss Gallagher made it through and when she woke up, she was surrounded by her family who were crying with happiness.

She said: ‘When I awoke from the coma, I was surrounded by doctors, nurses, and family and all I saw was tears of joy on everybody’s faces but I couldn’t understand why.

‘Once they told me what had happened, I just cried and hugged my family. I then started immediately asking questions. Why? Did I do something to cause this? What do we do now?’

‘I was in intense pain after waking up from the coma, I had double vision and was cross eyed. The double vision went away, the left side gradually improved slightly, but to this day I still have left peripheral vision loss.’

As a result of the aneurysm, Miss Gallagher developed epilepsy and has suffered ten to 15 seizures over the years.

She has since had further surgeries, such as another bone flap removal in her skull due to an infection.

Miss Gallagher is now recovering from her last ever surgery on April 4, 2019, at University Hospital in London, Ontario.

She said: ‘Honestly, looking back, every time I thought I went through the toughest part, something else would happen that would replace it.

‘Every time I thought it was over, something new would happen; a complication, an infection, a surgery, a seizure, having to stop school. 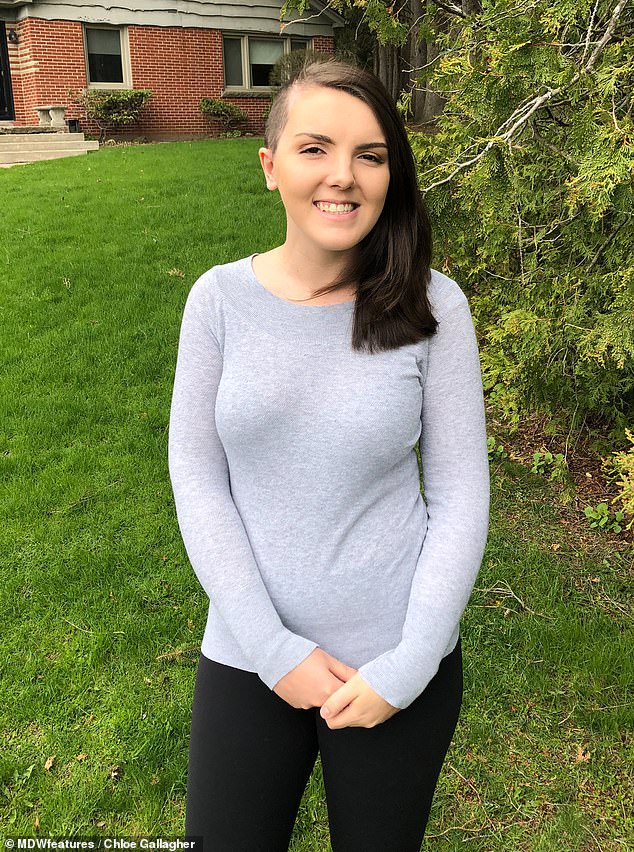 Miss Gallagher has had seven operations in total since her brain aneurysm. Pictured recently, after what she hopes will be her final operation on April 4 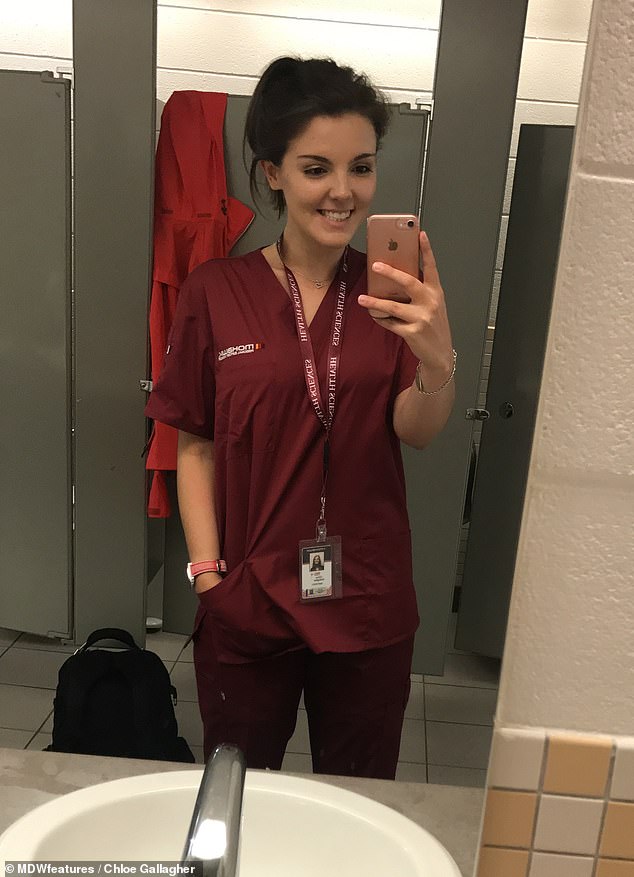 Miss Gallagher is now recovering and hopes to study a course in the medical field. Pictured in her scrubs 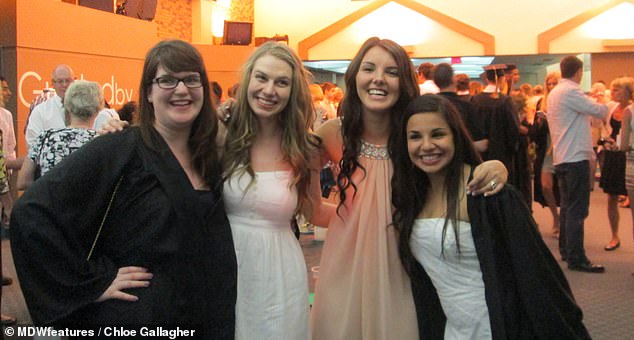 Miss Gallagher said her biggest supporters have been her family doctor, friends and family