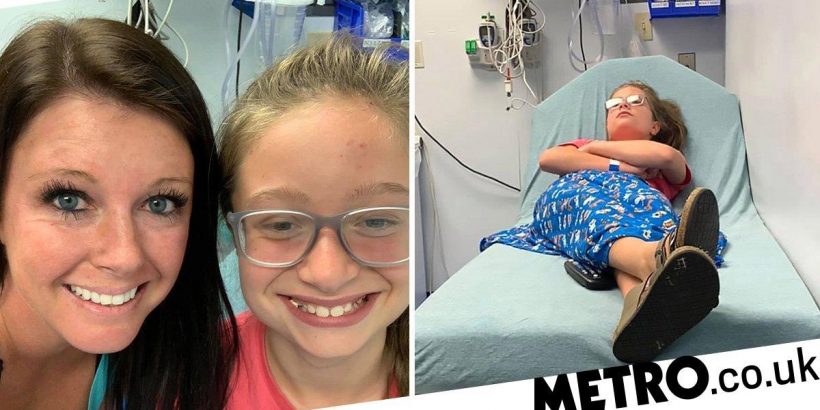 It was just a normal morning, where the sisters were getting ready for church. Within minutes Alicia was experiencing ‘one of the scariest moments of her life.’

She explained on Facebook that her sister went very pale, her lips went blue and she was unresponsive and limp.

She said that she was also shaking and it was ‘very seizure like.’

After taking her to hospital, they discovered she had suffered from a hair-grooming syncope.

The condition is common in children from ages five to 13, where doing something to the hair causes nerve stimulation and means some children have seizure like symptoms.

According to the Heart Rhythm Alliance, hair-grooming syncope most commonly occurs in young women who experience nausea, light headedness, sweating, and visual disturbances before fainting. Research suggests that the pulling of the hair or scalp has an effect on a particular nerve in the head that triggers the faint.

Alicia said: ‘I experienced one of the scariest moments of my life this morning with my little sister and I am going to put this out there because I had never heard of this in my life!

‘Look it up. This morning I was curling my little sister Gracie’s hair for church. I was maybe about five minutes in and she starts to gag a little and looks kind of pale.

‘I asked her if she was going to get sick and she shook her head yes. I get my little daughters out of the bathroom and start to hold her hair up for her as she leans over the toilet. 30 seconds later… she looks at me. She is extremely pale with blue lips and starts to pass out. Her pupils got really big and I caught her.

‘I start screaming for Dale to come help. Gracie has a blank stare and look on her face and is completely unresponsive and limp for about a minute. Her hands were also shaking. Very seizure like. She then comes back to and says she feels much better.

‘She says she remembers hearing us talk but couldn’t see us. I was crying. She was very confused. My mom and dad rush to my house and a few hours in Children’s hospital, an EKG, and a head scan later… she is fine.’

Alicia adds that she had no idea something like this could happen and she wanted to spread the word about hair-grooming syncopre.

She said: ‘Turns out there is something called hair-grooming syncope affects kids from ages 5-13. They said they see about 1-5 cases a year. Turns out brushing, curling, braiding, or drying can cause nerve stimulation on the scalp and cause some children to have seizure like symptoms.

‘I HAVE NEVER HEARD OF THIS BEFORE! We were told if she ever starts to feel nauseous or light headed while getting her hair brushed to sit down and take a break. I am putting this out there for others to see.

‘If a kid ever complains of their belly hurting or feeling light headed while they are getting their hair done, make sure they take a seat and keep a close eye on them! Apparently very rare but so scary to see it happen!’