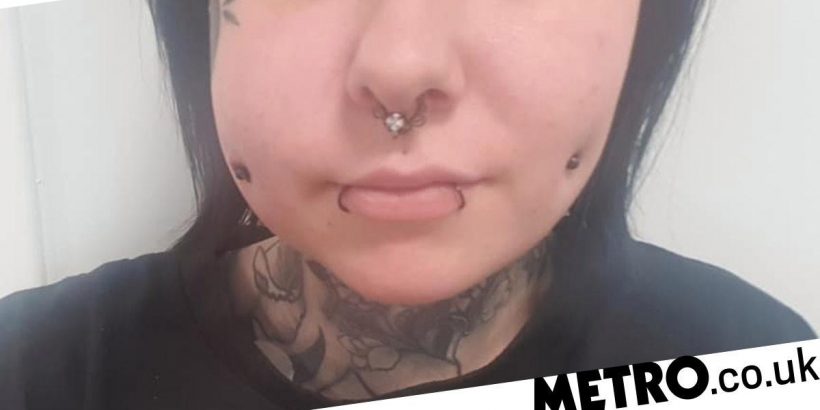 Care worker Kayleigh Brenchley is warning of the risks of piercings after hers became infected, swelled up, and left her with a ‘significant hole’ in her face.

Kayleigh, 21, had just finished a 12 hour shift at work when she noticed her right cheek was a little sore.

She’d had her cheeks pierced over a year before with no issue, and says they had been completely healed for the last six months. She hadn’t knocked her face (at least not badly enough that she noticed), and she couldn’t spot any dirt or food stuck in the piercing. Kayleigh went to sleep.

That evening she woke up to find her cheek was puffy. A few hours later it had doubled in size.

By 10pm Kayleigh’s cheek was hugely swollen, hot to the touch, and leaking pus. After calling 111 the care worker was told to go to A&E.

‘I had every test you could imagine,’ Kayleigh wrote in the Facebook group Girlsmouth. ‘I had ECGs, bloods, my heart rate was through the roof, I was put on sepsis watch.

‘After seven and a half hours at A&E, one antibiotic drip and one steroid drip later they allowed me home.’

The next day Kayleigh went for an emergency appointment at the maxillofacial clinic, by which point the piercing had been ‘completely engulfed’ by her cheek.

Attempting to remove the piercing was incredibly painful.

‘I took five lots of adrenaline and local aesthetic to make my cheek numb enough that I wasn’t screaming in pain,’ said Kayleigh.

‘Whilst completely awake they attempted to pull open my cheek with their hand from the inside to remove the bar, then manually squeezed my cheek to remove as much infected pus as possible.

‘Even with numbing this was the worst pain I have ever experienced, I was screaming, sobbing and has to be pinned down to stop my body from shaking so violently in pain.’

Kayleigh was told by doctors she had been left with a ‘significant hole’ through her face, that had been left as an open wound in the hope that it will drain itself.

Now she has to wait. Depending on the state of her cheek in the next few days, Kayleigh will either need stitches, surgery to cut open her cheek, or surgery to correct the large hole left behind by the piercing.

‘The doctors say it may have been from a knock but they couldn’t find the direct source of the infection,’ Kayleigh tells Metro.co.uk.

‘I’m still in a lot of pain but taking painkillers.

‘The doctors have told me I have a significant hole in my face. I am too afraid to look under the dressing. The doctor even suggested someone else changing the dressing for me for the next week to stop me from panicking or passing out.’

Kayleigh is sharing her experience to warn people of the risks of specialised piercings, explaining that even with proper care things can go wrong.

‘I would really like people to consider the risks of having specialised piercings,’ she tells us. ‘I have many piercings and tattoos and I’ve always been extremely vigilant with cleaning and care.

‘This can happen to anyone for no reason at all.

‘No matter how well you look after risky piercings, it can take one tiny thing to happen for it to go majorly wrong.

‘I am very experienced with tattoos and piercings and even the doctors are baffled as they could not figure put how this has happened.

‘My heart rate is still through the roof, my face keeps dropping as well as my lips twitching had I may be left with a deformed face.

‘Please, please look after yourself girls. This is not to scare anyone but I think people should be made aware of how badly [piercings] can go.’