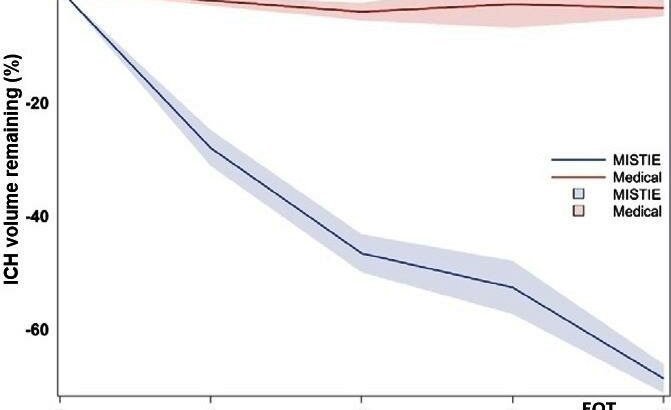 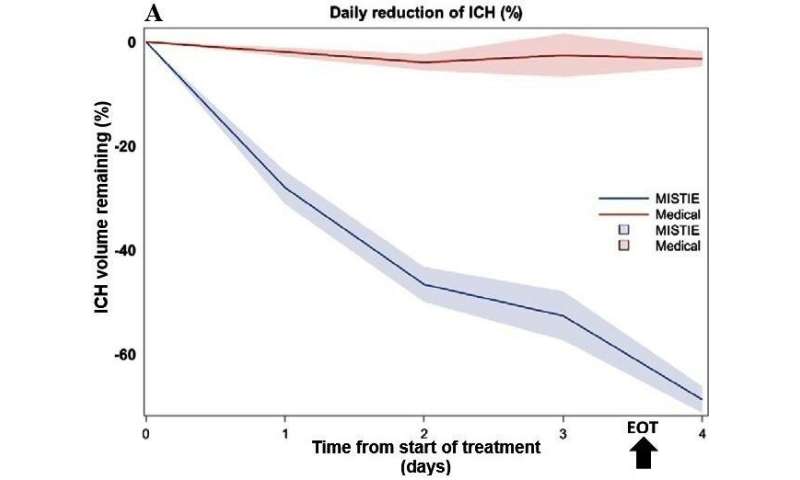 In the first study to identify specific surgical goals for the treatment of an intracerebral hemorrhage—the deadliest and most disabling type of stroke—a team of neurosurgeons found that at least 70 percent of the hemorrhage has to be removed for patients to make a meaningful recovery.

Worldwide, more than 1 million people each year develop an intracerebral hemorrhage. It occurs when a diseased blood vessel within the brain bursts, allowing blood to leak inside the brain. Hemorrhagic strokes make up about 12 percent of all strokes, but they cause about 40 percent of all stroke deaths. The most common risk factor is high blood pressure.

In this study, the researchers found that removing 70 percent or more of the hemorrhage could produce better outcomes. Ideally, there should be no more than 15 milliliters, about a tablespoon of clotted blood, remaining at the site of the injury. Anything less than that was even better.

This is the first surgical trial to connect specific volume-reduction goals with improved functional outcomes. Prior to this trial, known as MISTIE III (Minimally Invasive Surgery Plus rt-PA for Intracerebral Hemorrhage Evacuation), there was no specified goal for clot removal.

“We found that for surgeons treating a brain hemorrhage, it is critical to maximize the amount of blood the surgeon can safely remove from the site,” said study leader Issam Awad, MD, the John Harper Seeley Professor in Neurological Sciences and Director of Neurovascular Surgery at the University of Chicago Medicine. “Unless at least 70 percent of the clot is promptly removed and only a very small residual amount of blood remains, the potential benefits of surgery will not be realized.”

“This cannot be taken for granted,” he added. “Intracerebral hemorrhage is a catastrophic illness. When surgery is performed, we must be certain that the blood is in fact removed. Surprisingly, this had not been considered in assessing the effectiveness of surgery. This is the first surgical trial to demonstrate a clear and urgent goal for reduction of intracerebral hemorrhage volume.”

Two research teams will present data from MISTIE III in back-to-back “late-breaking-science” presentations at the American Heart Association’s International Stroke Conference in Honolulu, on Thursday, Feb. 7, 2019. Awad will report on the ability of aggressive clot removal to produce better functional outcomes. Daniel Hanley, MD, from Johns Hopkins Medicine, will present data on overall analyses of safety and efficacy of the surgery.

The trial involved 78 hospitals in North America, Europe and Asia. Between December 30, 2013 and August 15, 2017, researchers enrolled 506 patients at least 18 years old who had suffered a spontaneous, non-traumatic, intracerebral hemorrhage in the previous 24 hours. Patients were promptly treated and periodically evaluated at regular intervals for one year.

About half (255) of the patients enrolled in the trial were randomly assigned to the MISTIE surgical procedure. The other 251 patients were assigned to the study’s medical arm, which includes ICU care but no surgical intervention. Thirteen patients left the surgical arm for various reasons, so 242 patients received the procedure and were available for evaluation.

The surgical approach to an intracerebral hemorrhage relies on careful mapping of the injury with computed tomography (CT) guidance. The surgical team then drills a small hole in the patient’s skull and inserts a tiny rigid cannula. The surgeons maneuver the cannula to the blood that has accumulated in the brain and aspirate as much of it as possible.

Since the blood has already clotted, it cannot all be suctioned, so a softer catheter is placed in the remaining clot, secured in place, and the clot-busting drug alteplase (marketed as Activase) is given through the catheter to loosen the clot and allow it to drain into a bag. This removes as much of the damage-causing blood as possible.

The surgery itself takes about an hour, but the alteplase injection is repeated every eight hours. Treatment averaged 2 days after the stroke, with a range of 1-4 days. Prior to this study, it was not known how much of the blood must be removed to gain the benefit of the procedure.

In 59 percent of the cases in the MISTIE III trial, the teams succeeded in reducing the clot to 15 milliliters or less. With the removal of each additional milliliter of clotted blood, the odds of a good outcome improved 10 percent.

Some of these operations “were remarkable,” Awad said. Many of the surgeons were able to approach “a clot the size of a tennis ball and gently reduce it to less than 5 milliliters.”

Patients could survive with less surgery and manipulation, Awad suggested. “If you get half of the clot out, you can save the person’s life,” he said. “But to get real functional benefit, you have to go all the way. You have to remove most, if not all, of the clot.”