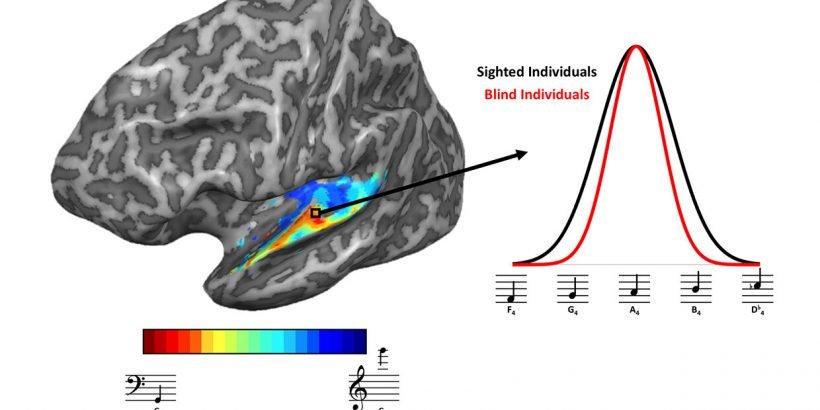 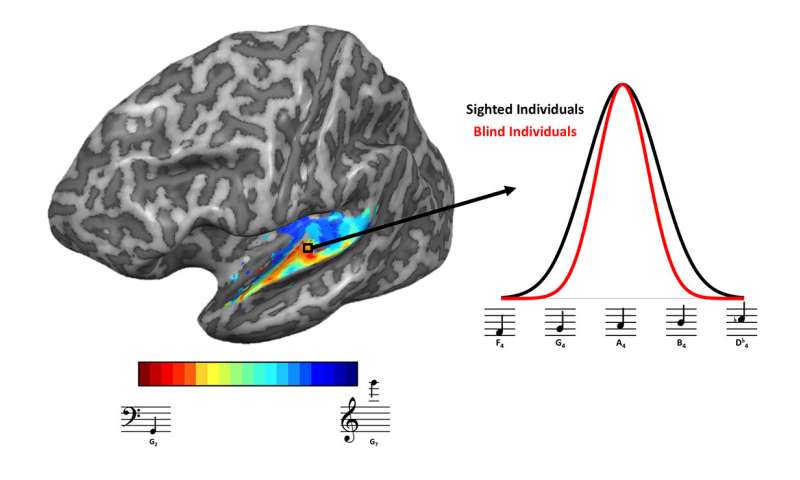 Research has shown that people who are born blind or become blind early in life often have a more nuanced sense of hearing, especially when it comes to musical abilities and tracking moving objects in space (imagine crossing a busy road using sound alone). For decades scientists have wondered what changes in the brain might underlie these enhanced auditory abilities.

Now, a pair of research papers published the week of April 22 from the University of Washington—one in the Journal of Neuroscience, the other in the Proceedings of the National Academy of Sciences—use functional MRI to identify two differences in the brains of blind individuals that might be responsible for their abilities to make better use of auditory information.

“There’s this idea that blind people are good at auditory tasks, because they have to make their way in the world without visual information. We wanted to explore how this happens in the brain,” said Ione Fine, a UW professor of psychology and the senior author on both studies.

Instead of simply looking to see which parts of the brain were most active while listening, both studies examined the sensitivity of the brain to subtle differences in auditory frequency.

“We weren’t measuring how rapidly neurons fire, but rather how accurately populations of neurons represent information about sound,” said Kelly Chang, a graduate student in the UW Department of Psychology and lead author on the Journal of Neuroscience paper.

That study found that in the auditory cortex, individuals who are blind showed narrower neural “tuning” than sighted subjects in discerning small differences in sound frequency.

“This is the first study to show that blindness results in plasticity in the auditory cortex. This is important because this is an area of the brain that receives very similar auditory information in blind and sighted individuals,” Fine said. “But in blind individuals, more information needs to be extracted from sound—and this region seems to develop enhanced capacities as a result.

“This provides an elegant example of how the development of abilities within infant brains is influenced by the environment they grow up in.”

The second study examined how the brains of people who are born blind or become blind early in life—referred to as “early blind” individuals—represent moving objects in space. The research team showed that an area of the brain called the hMT+—which in sighted individuals is responsible for tracking moving visual objects—shows neural responses that reflect both the motion and the frequency of auditory signals in blind individuals. This suggests that in blind people, area hMT+ is recruited to play an analogous role—tracking moving auditory objects, such as cars, or the footsteps of the people around them.

The paper in the Journal of Neuroscience involved two teams—one at the UW, the other at the University of Oxford in the United Kingdom. Both teams measured neural responses in study participants while participants listened to a sequence of Morse code-like tones that differed in frequency while the fMRI machine recorded brain activity. The research teams found that in the blind participants, the auditory cortex more accurately represented the frequency of each sound.

“Our study shows that the brains of blind individuals are better able to represent frequencies,” Chang said. “For a sighted person, having an accurate representation of sound isn’t as important because they have sight to help them recognize objects, while blind individuals only have auditory information. This gives us an idea of what changes in the brain explain why blind people are better at picking out and identifying sounds in the environment.”

The Proceedings of the National Academy of Sciences study examined how the brain’s “recruitment” of the hMT+ region might help blind people track the motion of objects using sound. Participants once again listened to tones that differed in auditory frequency, but this time the tones sounded like they were moving. As has been found in previous studies, in blind individuals the neural responses in area hMT+ contained information about the direction of motion of the sounds, whereas in the sighted participants these sounds did not produce significant neural activity.

By using sounds that varied in frequency, the researchers could show that in blind individuals, the hMT+ region was selective for the frequency as well as the motion of sounds, supporting the idea that this region might help blind individuals track moving objects in space.

“These results suggest that early blindness results in visual areas being recruited to solve auditory tasks in a relatively sophisticated way,” Fine said.

This study also included two sight-recovery subjects—individuals who had been blind from infancy until adulthood, when sight was restored via surgery in adulthood. In these individuals, area hMT+ seemed to serve a dual purpose, capable of processing both auditory and visual motion. The inclusion of people who used to be visually impaired lends additional evidence to the idea that this plasticity in the brain happens early in development, Fine said, because the results show that their brains made the shift to auditory processing as a result of their early-life blindness, yet maintains these abilities even after sight was restored in adulthood.

According to Fine, this research extends current knowledge about how the brain develops because the team was not only looking at which regions of the brain are altered as a result of blindness, but also examining precisely what sort of changes—specifically, sensitivity to frequency —might explain how early blind people make sense of the world. As one of the study participants described it, “You see with your eyes, I see with my ears.”