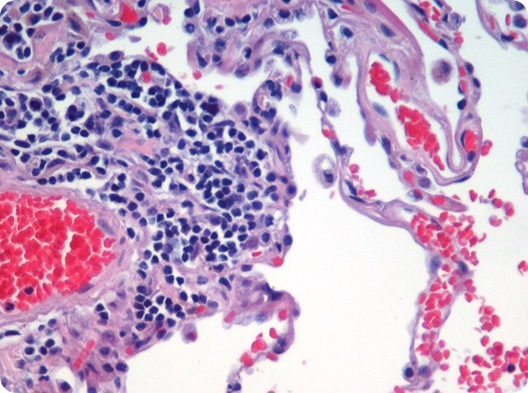 Emphysema is a chronic or long term lung disease. This disease is typically called hyperinflation.

What happens in emphysema?

Just like a balloon the lungs are over-inflated so that they lose their elasticity and elastic recoil. There are balloon like bullae or blisters in the lung tissues.

Because carbon dioxide is trapped in the bullae, the body is deprived of fresh air flowing into the lungs. The lungs begin by compensating by taking deeper breaths.

This further expands the lung tissues and makes it lose its elasticity. With loss of elasticity more carbon dioxide accumulates in the lungs leaving less space for fresh air and this leads to shortness of breath.

With time the muscles and ribs begin to expand to contain the expanded lungs. The diaphragm that lies beneath the lungs and is normally dome shaped also flattens and lose their functional capacity.

One of the most important causes of emphysema is cigarette smoking. Other causes include air pollution, work hazards, and lung infections.

Cigarette smoke changes the structure and function of the lungs by causing irritation and inflammation of the narrow airways. This leads release of enzymes in the lungs that destroy lung tissues and an increased size in the air sacs eventually leading to emphysema.

Alpha-1 antitrypsin deficiency is a rare genetic condition where there are decreased levels of the protective protein, alpha-1 antitrypsin. Alpha-1 antitrypsin protects the lungs from the destructive effects of enzymes. Patients who lack this enzyme thus have lungs that are damaged by enzymes called elastases at an early age.

Diagnosis and treatment of emphysema

Emphysema is typically characterized by shortness of breath and wheezing. It is now considered to be a part of chronic obstructive lung disease. The destruction of lung tissue seen with emphysema leads to a reduction in the functional capacity of the lungs.

Early diagnosis and management can help prevent gross damage to the lungs. Several breathing tests as well as imaging studies like X rays are used in diagnosing emphysema.

Lung transplantation and lung volume reduction surgery are surgical options that are available. These should be used only when the use of all medical treatments as well as pulmonary rehabilitation have been tried and symptoms continue to persist.