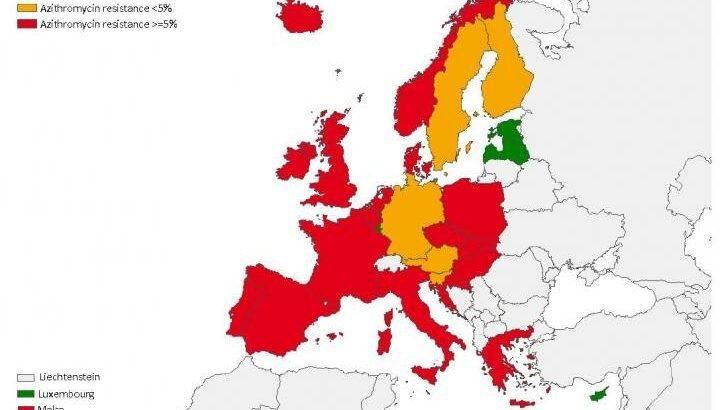 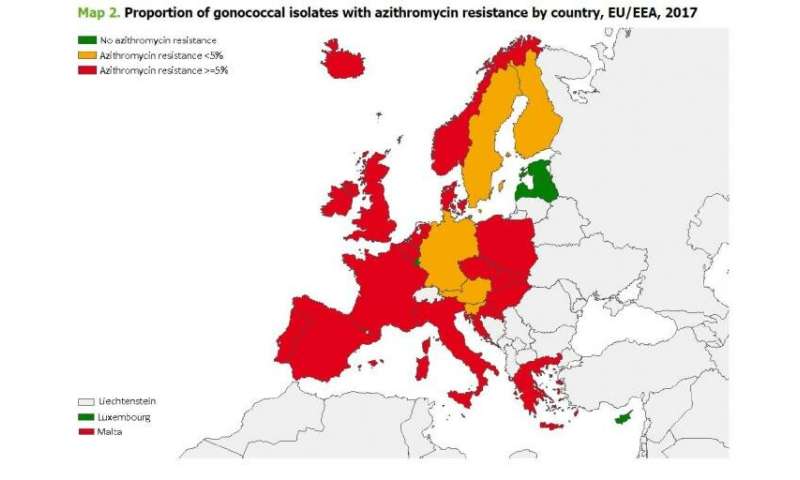 Gonorrhoea is the second most commonly notified sexually transmitted infection across the EU/EEA countries with almost 500 000 reported cases between 2007 and 2016. The infection is treatable but Neisseria gonorrhoeae keep showing high levels of azithromycin resistance according to latest results of the European Gonococcal Antimicrobial Surveillance Programme. This antibiotic agent is part of the currently recommended therapy regimen for gonorrhoea and observed resistance patterns threaten its effectiveness.

Each year, countries of the European Union and European Economic Area (EU/EEA) participate in ECDC’s sentinel European Gonococcal Antimicrobial Surveillance Programme (Euro-GASP) to test susceptibility of Neisseria gonorrhoeae to the antibiotics commonly used for gonorrhoea treatment. This way ECDC monitors the effectiveness of the recommended antibiotic treatment. The 2017 Euro-GASP results indicate that the rates of resistance to cefixime, ceftriaxone and azithromycin have remained stable when compared to recent years.

In 2017, 27 EU/EEA countries collected and tested 3 248 gonococcal isolates which revealed that cefixime and azithromycin resistance (1.9% and 7.5% respectively) remained unchanged compared to 2016 (2.1% and 7.5%). However, the number of countries reporting resistant isolates for each antimicrobial increased. For the second year in a row, no isolates with resistance to ceftriaxone were detected in contrast to one in 2015, five in 2014 and seven in 2013.

“The fact that we have not seen ceftriaxone resistance among the tested isolates for two consecutive years is promising. But at the same time, the persistent level of resistance to azithromycin across Europe is a major concern for us because it compromises the recommended dual therapy with ceftriaxone and azithromycin”, explains ECDC expert Gianfranco Spiteri. “There is no available vaccine and the capacity for surveillance of resistance patterns is insufficient in some regions. If the common antibiotics stop working due to resistance, we only have very limited alternatives left to successfully treat gonorrhoea.”

Successful gonorrhoea treatment with antibiotics reduces the risk of complications such as pelvic inflammatory disease, ectopic pregnancies, infertility or increased HIV transmission in some settings. Combined with regular testing to diagnose and treat infections at an early stage, it serves as one of the main public health strategies in order to reduce further transmission.

The gap: lack of information on used treatment

According to the latest Euro-GASP results, 86% of patients with available information on their treatment course received ceftriaxone (with or without) azithromycin. The use of two antimicrobials for gonorrhoea therapy, which was introduced in 2012, has likely contributed to increased susceptibility to ceftriaxone. However, data completeness for the Euro-GASP isolates regarding the used treatment course still needs to improve as information on this was only available for one-third (37%) of tested isolates in 2017.

Recent reports of extensively drug-resistant gonorrhoea strains, make it vital to understand if changes in resistance prevalence are the consequence of modifications in treatment, sexual behaviour in different sexual networks, the gonococcal strain distribution or due to other reasons.