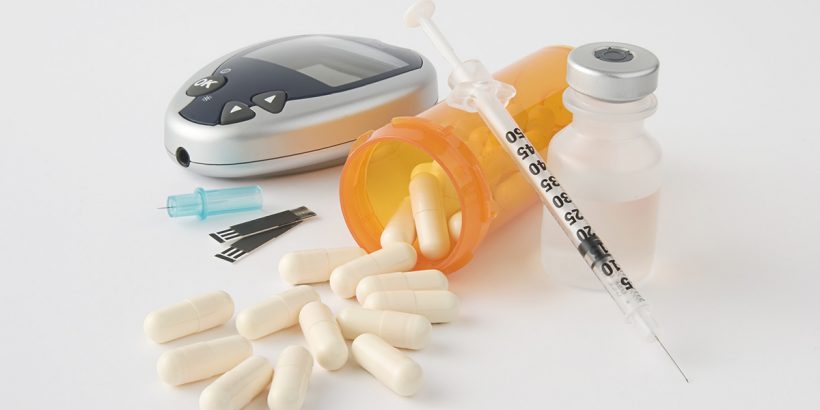 Washington University School of Medicine in St. Louis is part of a national research network aiming to discover rare forms of diabetes as a first step toward providing more effective treatments.

Most patients diagnosed with diabetes have either type 1, which is managed with insulin injections because patients can’t make their own insulin, or type 2, in which patients either don’t make enough insulin or don’t respond well to the insulin their bodies produce. People with type 2 diabetes are treated with medications.

But an increasing number of patients don’t fall into these two general categories, and they need a more precise diagnosis and a more individualized treatment. The Rare and Atypical Diabetes Network (RADIANT), funded by the National Institute of Diabetes and Digestive and Kidney Diseases of the National Institutes of Health (NIH) will involve about 2,000 people nationwide who will be screened for unusual forms of diabetes.

“We are looking for new and different forms of diabetes, particularly in immigrant and minority populations, where it has been reported that atypical forms of diabetes are more common,” said Fumihiko Urano, MD, PhD, the lead investigator at the Washington University clinical site. “We also are looking for rare types of diabetes that result from specific gene mutations. Using precision medicine, we have tools now to identify, and possibly to treat more effectively, these rare forms of disease.”

Urano, the Samuel E. Schechter Professor of Medicine and a professor of pathology and immunology, plans to recruit 200 patients with diabetes in the next year at the Washington University site. He and the other network researchers envision building a comprehensive database of genetic, clinical and descriptive data about previously unidentified forms of diabetes to provide more information about those forms of the illness to doctors and researchers, allowing them to recognize atypical forms of diabetes more quickly, as well as to develop new or more personalized treatment strategies.

Those eligible to participate include individuals diagnosed with type 2 diabetes before the onset of puberty, those with type 2 diabetes who are not overweight, and people with a family history of diabetes, particularly those from families where most family members with diabetes were diagnosed before the age of 18. Investigators also are seeking those with very abnormal cholesterol or lipid levels and an unusual distribution of body fat, as well as people whose diabetes appears to wax and wane. Those not eligible for the study include people who have a high likelihood of having an already known form of diabetes and women who are pregnant.

Study subjects will be asked to complete surveys and to provide measurements of height, weight and blood pressure. They also will undergo genetic testing and be asked to provide researchers with detailed family histories.

Next, experts will review surveys and test results to determine whether an individual’s diabetes can be considered atypical or rare.

Most people with atypical diabetes are diagnosed, at least initially, with type 1 or type 2 diabetes, but they tend to experience a different disease course, different complications or unusual responses to standard diabetes medications.

Urano has experience treating an extremely rare and atypical form of diabetes known as Wolfram Syndrome. That disorder features blood sugar problems, but unlike more common forms of diabetes, it is caused by a single genetic mutation and progresses to include serious vision, balance and other neurological problems.

As part of the RADIANT study, researchers will select certain participants to gather detailed clinical and biological information through a wide range of tests, including genome sequencing, blood sampling and physical exams; and participants may get additional specialized tests based on the specific characteristics of their form of diabetes.

Family members of enrolled participants also may be invited to participate in the study, particularly if the condition appears to be inherited. Members of minority groups are particularly encouraged to apply for the study because different forms of atypical diabetes — although rare — tend to be more common in minority populations than in Caucasians.

“It’s extremely frustrating for people with atypical diabetes when their diabetes seems so different and difficult to manage,” said the study’s project scientist, Christine Lee, MD, of the NIH’s National Institute of Diabetes and Digestive and Kidney Diseases. “Through RADIANT, we want to help patients and the broader health-care community by finding and studying new types of diabetes to shed light on how and why diabetes can vary so greatly.”

For more information, people who have forms of diabetes that seem different from common types of the disorder may call Stacy Hurst at 314-747-3294, e-mail [email protected] or visit www.atypicaldiabetesnetwork.org for more information about the study and how to join.