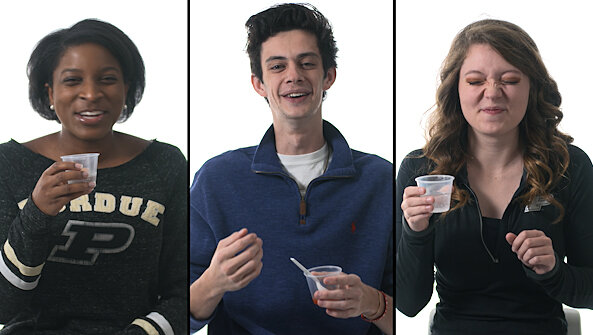 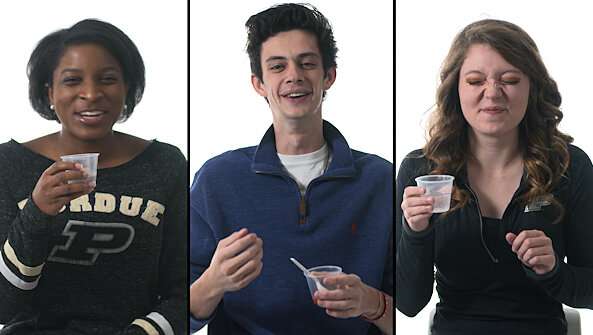 Our physical and mental state influences our eating habits. But scientists are still trying to understand how one biological process affects how we eat. Warning: Learning more could kill your appetite.

“For flavor, spit and nasal mucus are the media in which all of those reactions occur, and that’s disgusting. But at the same time, it blows my mind how little we actually know about it,” said Cordelia Running, an assistant professor of nutrition science in College of Health and Human Sciences and director of the SPIT Lab at Purdue University. “It’s really different from person to person; it’s really different by time of day; it’s really different based on how much sleep you got, how stressed you are and what drugs you’re on. It’s shockingly complex, and there’s so many questions we could ask about it.”

Biology and psychology collide to manipulate the ecosystem of the mouth, and vice versa, Running said. Researchers at the SPIT Lab—short for saliva, perception, ingestion and tongues—examine how this relationship can alter the taste, texture and smell of foods and ultimately influence people’s eating habits, which can have profound implications. A picky eater, for example, could miss out on important nutrients; a sweet tooth could contribute to obesity or diabetes; a swallowing disorder could turn one’s lifestyle upside-down.

“We measure what things can alter people’s perception of their food, whether that’s biochemistry in the mouth or neurochemistry happening in the brain,” Running said. “I can’t directly collect samples from the brain, but I can at least measure peoples’ responses and how they behave or what they think about a food based on the context in which they’re eating something. All of those sorts of things can matter, so we try to tweak that and see if we could change the way people think about what they’re eating—hopefully to help them eat healthier, and happier.”

Context is important when it comes to enjoying a meal. An individual’s perception of food and drinks can alter his or her physiology, which, in turn, can affect taste, texture, smell and other sensations. The expensive price tag and fancy label on a bottle of wine, for example, is just as important as the flavor of the wine itself, Running said.

To test how context can affect appetite, Running and Jonathan Kershaw, an assistant professor of dietics at Bowling Green State University and a former postdoctoral scholar at Purdue, successfully conditioned test subjects in one study to salivate when presented with images associated with sour candy. While most people are familiar with this idea of certain foods being “mouth-watering,” it’s actually really hard to measure that saliva response to foods in a lab, Running said.

One’s bodily functions must also be considered. In another study by Running and John Hayes, her former advisor at Penn State University, participants experienced bitter flavors more intensely when they swallowed a solution compared to spitting it out.

“Our research is really interested in bitterness because there’s so many different types of molecules that are bitter,” she said. “Even on the physiological side, you have one receptor for sweet tastes and more than 25 for bitter, and they tend to respond at lower absolute concentrations. We always think the sweetness of sugar as being this really strong sensation, but it actually takes a lot of sugar to get there compared with something like caffeine or the polyphenols that are bitter in chocolate, wine and green tea, or in kale and brussels sprouts. As those bitter molecules can directly influence people’s health, for better or worse, that perception of bitterness is important.”

The way in which humans’ bodies and minds have learned to enjoy bitterness offers a window into understanding how they could learn to like other foods that are healthier, Running said.

“People clearly can learn to like bitter things,” she said. “How does that switch occur? How do we learn to like things that don’t taste good on a fundamental level? Then on the other side, for things like sweetness, how do we tamp that down a bit? Can we adjust people in ways that they’ll choose to eat something that isn’t as sweet?”

In an age where cheap snacks and drinks are packed full of sugar, the goal of the lab is to learn how nutritious food could be enjoyed by everyone—”not just the young, the healthy, the wealthy, and the culinary-inclined,” Running writes on the lab website.

In a 2019 pilot study, for example, Running and several colleagues at Purdue found that dialysis patients tasted flavors associated with monosodium glutamate, sodium chloride, and sodium phosphate more intensely than healthy participants. Typically filtered by the kidneys, the presence of these substances in patients’ blood may negatively affect the flavors of the food they eat, causing poor nutritional intake.

Running’s ongoing work also examines how carbonated beverages and special flavors might help people with swallowing disorders enjoy their drinks without thickeners, which prevent fluids from being sucked into the lungs, but also create an unpleasant, slimy texture.

Whether it’s using thickeners, eating more vegetables or cutting back on sugar, recommendations from the doctor to change one’s diet usually isn’t welcome news. But better understanding the sensations and secretions associated with food can help make these changes tolerable.