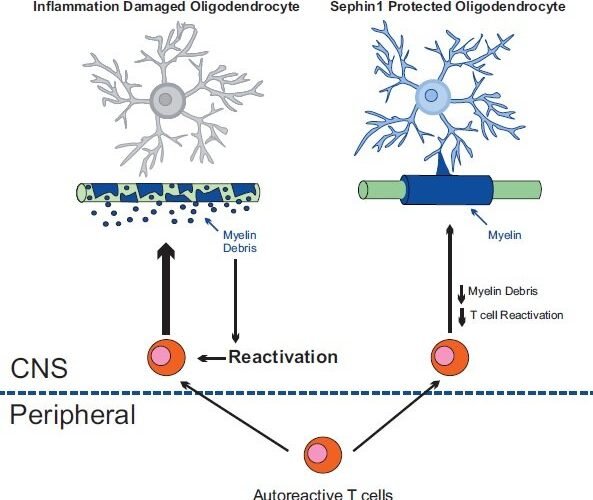 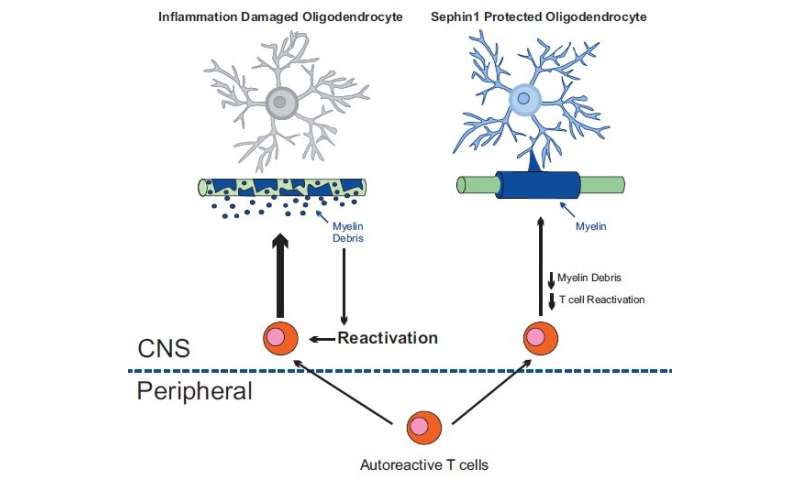 A small molecule, Sephin1, may be able to significantly delay harm to nerve cells caused by multiple sclerosis, a disabling immune-mediated disease that damages nerve fibers in the brain and spinal cord.

These nerve fibers are wrapped in a sheath of fatty tissue called myelin, which acts as a protective blanket, like insulation around an electrical wire. The myelin sheath enables electrical impulses to flow along a nerve with speed and accuracy.

This protective sheath is produced and maintained by highly specialized cells called oligodendrocytes. When these cells are damaged by MS, however, the myelin sheath degenerates and nerve impulses slow down or stop. Damage to the sheath can cause the underlying nerve fiber to die.

In the journal Brain, a team based at the University of Chicago show that treating mice suffering from a mouse model of MS with Sephin1 (selective inhibitor of a holophosphatase) was able to “delay the loss of myelin and postpone the onset of debilitating disease,” according to senior study author Brian Popko, Ph.D., the Jack Miller Professor of Neurological Disorders, and Director of the Center for Peripheral Neuropathy at the University of Chicago.

Most people with MS have relapsing-remitting disease, in which episodes of acute worsening are followed by remissions with partial or complete recovery. About 60 to 70 percent of people with relapsing-remitting MS, however, eventually develop a steady progression of symptoms, known as secondary-progressive MS. Over time this leads to permanent neurological damage that can cause motor, sensory and cognitive deficits. Patients complain of fatigue, trouble walking, confused thinking, slurred speech and other issues.

A promising drug called guanabenz (marketed as Wytensin), used to treat hypertension, “appears to enhance the oligodendrocyte’s own protective machinery to diminish the loss of myelin,” said Popko. But this drug has side effects. It can cause drowsiness, weakness, headache, dry mouth and even coma.

Popko and colleagues, however, found that the guanabenz derivative, Sephin1, has much fewer side effects. It can boost the integrated stress response (ISR), a mechanism that protects endangered cells from misguided inflammatory damage. Sephin1 enhances the molecular signal (p-eIF2α) that triggers a protective response against inflammatory damage. This shields the myelin-producing oligodendrocytes from inflammatory stress.

In studies that involve giving Sephin1 to mice with experimental autoimmune encephalomyelitis (the mouse version of MS), “we found that it offers therapeutic potential with no measurable adverse effects,” said Yanan Chen, Ph.D., a postdoctoral fellow in the Popko laboratory who led this project.

“By protecting oligodendrocytes and diminishing demyelination we also reduce the generation of myelin debris,” Popko said. “The decreased exposure to myelin fragments should also limit the auto-immune response.”

This protective focus on oligodendrocytes provides a new therapeutic approach for MS. Since Sephin1 targets a process distinct from the current anti-inflammatory approaches it may prove beneficial when used in combination. “Encouragingly, adding Sephin1 to the established anti-inflammatory MS drug interferon beta provided additive benefits to the mouse MS model,” Chen said.

An earlier study from Cambridge University confirmed that Sephin1 did not cause the adverse effects of Guanabenz. Sephin1 had no effect on general health or memory in diverse experimental paradigms. It also prolonged the integrated stress response in mice, preventing the protein-misfolding diseases Charcot-Marie-Tooth 1B and amyotrophic lateral sclerosis.