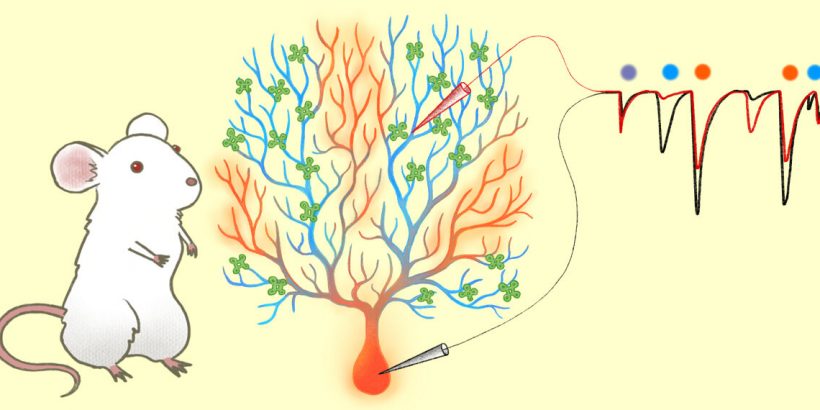 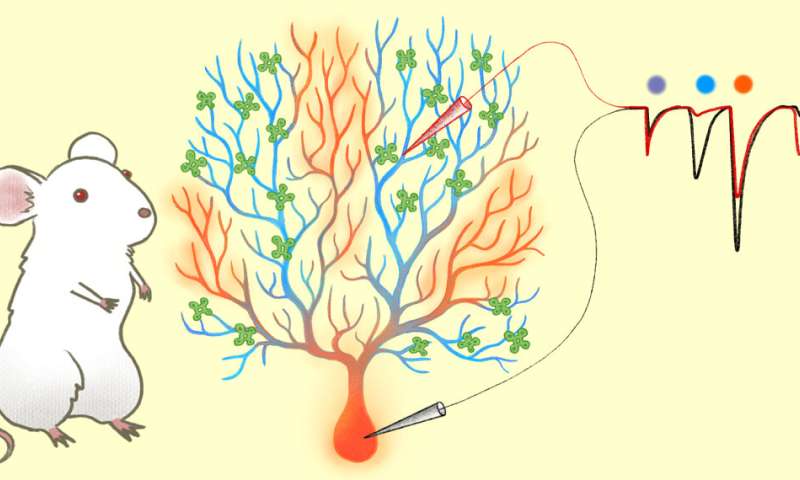 In mere milliseconds trillions of chemical reactions ignite signals that travel across the billions of neurons in our brain. As we go through our daily lives and absorb new knowledge these neurons begin to modify themselves and change their signaling properties.

However, the mechanisms of how signals are integrated into the neurons to establish such flexibility, also known as plasticity, remains elusive.

Publishing in the Journal of Neuroscience, Gen Ohtsuki of Kyoto University’s Hakubi Center reports that Purkinje cells—the primary output neurons in the cerebellum—have the ability to modulate and filter incoming signals. The findings bring new insight into the learning mechanisms of the cerebellum and the brain.

The cerebellum is a structure located at the base of the brain, and is known to play a vital role in motor control and cognitive function. Recent findings have even revealed its contributions in mental illnesses. One of the most vivid features of Purkinje cells are their long complex branches called dendrites.

It is thought that the plasticity of these Purkinje cell dendrites is the basis for cerebellar learning. However, validation of this hypothesis was difficult due to the challenge of measuring signals within a single cell.

Thankfully in a prior study, Ohtsuki was successful in measuring the electrical activity on dendrites of a single Purkinje cell utilizing the patch-clamp method.

“To measure how electrical signals travel through the Purkinje cell membrane, I applied this method using rats and measured the spontaneous synaptic activity between the dendrite and the ‘soma’ or cell body,” explains Ohtsuki.

What he found was that signals coming from dendrites far away from the soma, known as distal dendrites, were not being registered. This suggests the dendrites have a mechanism that limits electroconduction, and that individual branches can choose whether an input passes through or not. In fact, the same signals were registered when they came from proximal dendrites—the ones closer to the soma.

After further analysis it was found that these distal dendrites modulated their incoming signals through intrinsic plasticity associated with the down-regulation of an ion channel called an SK channel.

“One of the reasons for this new finding is because similar experiments used cesium ions in the intracellular fluid, so the phenomena itself could not be observed at all,” states Ohtsuki. “The results reveal a new learning mechanism at the dendritic level.”

He hopes to further verify these results and determine whether similar findings can be obtained with animals other than rodents, such as fish and reptiles, or higher mammals.