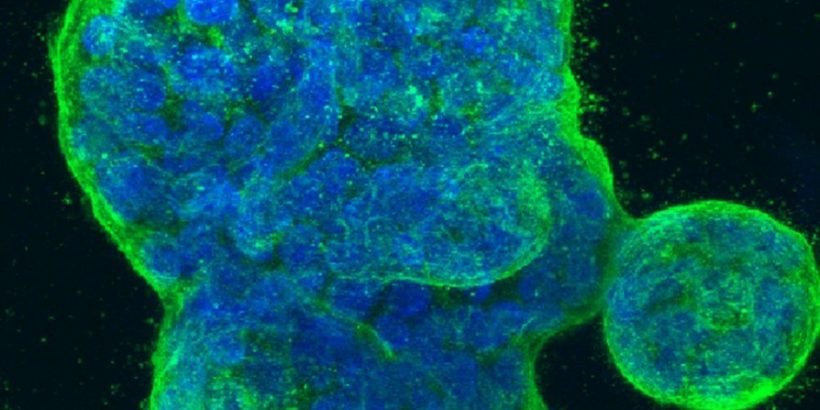 University of North Carolina Lineberger Comprehensive Cancer Center researchers have designed a novel way to attack an aggressive breast cancer. By working with a drug development company, they hope their laboratory discovery will translate to a new treatment combination in the clinic in the future.

The latest finding, described in the journal Cancer Cell International, builds on the work from the laboratory of UNC Lineberger’s Leslie Parise, Ph.D., professor and chair in the UNC School of Medicine Department of Biochemistry & Biophysics, which has been investigating a potential new drug target for triple negative breast cancer.

Parise has co-founded a company, Reveris Therapeutics, to try to develop drugs that selectively target and then shut down a protein in cells called CIB1. Their latest study identified ways to make this drug target more potent using additional potential treatments.

Parise’s lab had previously discovered the potential for CIB1 as a novel drug target, showing that when they deleted this protein using genetic engineering, they could kill cancerous cells and decrease tumor growth in mouse models.

Their latest study uncovered information about CIB1’s role, and found synergistic drug combinations. Alex Chung, a doctoral student in the UNC School of Medicine Department of Pharmacology, said they believe this protein is involved in regulating a cell death pathway called apoptosis, which triggers cells to self-destruct, as well as other pathways.

“We already knew CIB1 was important for cancer cell survival, but we wanted to find out why,” Chung said. “We believe it’s helping to protect cells from self-destructing, not just through apoptosis, but other cell death pathways. When we get rid of CIB1 in cancer cells, we found that both apoptosis and non-apoptotic cell death occur.”

They tested the effect of shutting down CIB1 in breast cancer cells in combination with a chemotherapy drug, docetaxel, to see what would happen. They found this paired approach selectively killed cancer cells over normal cells.

In addition, adding in a component of a “cell death” signal – the TNF-related apoptosis-inducing ligand, or TRAIL – had a synergistic effect, and caused an increase in cancer cell death but did not kill normal cells.

“When you add TRAIL to induce apoptosis and when we get rid of CIB1, we see many more cancer cells self-destructing,” Chung said.

Their findings could have important treatment implications since resistance to chemotherapy can occur when cells shut down apoptosis, he said.

Chung said they hope to see the findings translate into the clinic.