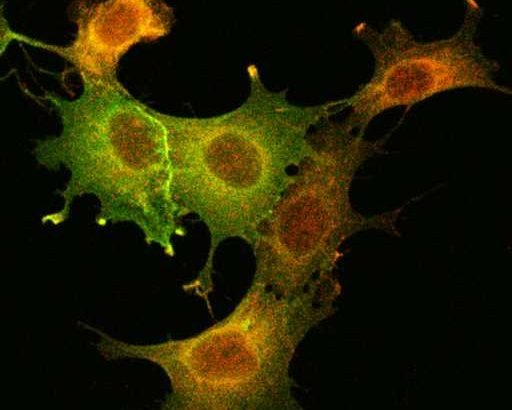 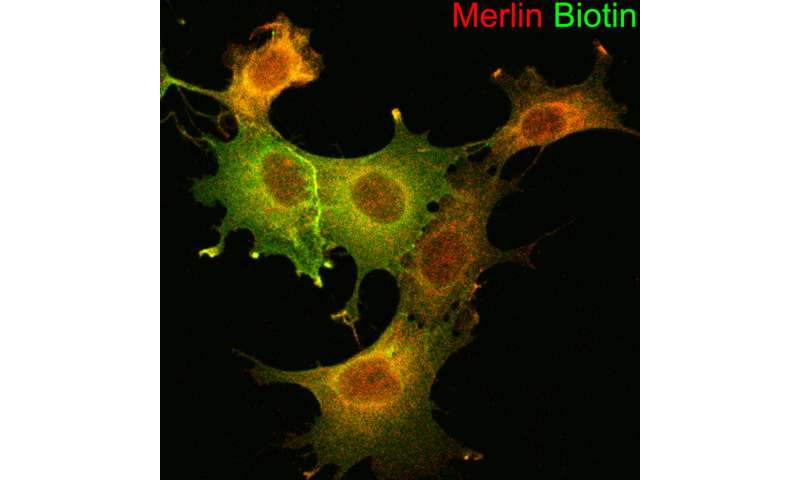 When a protein named “Merlin” fails to do its job, people can develop slow-growing, life-disrupting auditory nerve tumors that can disrupt their hearing and balance. This rare condition is called neurofibromatosis 2 (NF2).

Now scientists at Cincinnati Children’s have discovered much more about how Merlin does its job—by working behind the scenes through a network of more than 50 other proteins. For people afflicted by NF2, this discovery advances the hunt for drug therapies for a condition that, so far, has required surgery to treat.

But the findings also advance a concept with far wider implications for cancer research—that tumors have impaired response to physical forces and other mechanical signals. This opens up new possibilites to develop novel cancer therapies.

“The neurofibromatosis community will be very interested in these findings,” says Ratner, a leading authority on neurofibromatosis. “This is the first time this technique (called proximity biotinylation) has been used at Cincinnati Children’s and one of only a few findings based on this approach worldwide. Long term, this approach has lots of potential applications.”

NF2 is rare genetic condition that affects approximately one in 40,000 people. This condition produces tumors along nerve fibers, including the auditory nerve. Such tumors tend to start causing symptoms in the teen years, then get worse into adulthood.

The tumors are “benign” in the sense that they do not spread to other organs. However, when they grow in the confined space of the skull they can severely disrupt hearing and balance. Once the tumors become enough of a threat, surgeons remove as much tumor tissue as they can.

What did the new study reveal?

“This approach represents an entirely new way of thinking about NF2,” says Hennigan, a cancer biologist who has worked with Ratner for more than a decade. “Instead of shining a flashlight in a dark room to spot one protein involved, this study was like turning on the lights and seeing all the proteins in the room.”

The key implications include:

Each of these relationships will require further exploration, and drug development will require several more years of study, Hennigan says. However, one potential target already stands out: a protein called ASPP2.

Based on new information about how Merlin works, the ASPP2 connection suggests that targeting mechanical signaling pathways could become an important approach to stopping tumor growth when other treatments fail.

Surveying a cellular neighborhood with tools derived from camels and fireflies

Using a technique called proximity biotinylation, the lab team revealed not just which proteins interact with Merlin, but where the action happens. Merlin operates at the fringes, in places called cell junction complexes. That location matters, Hennigan says.

When functioning properly, the data suggest that Merlin helps cells understand their physical environment, including which other cells belong in their neighborhood, Hennigan says. When the street gets too crowded with cells jostling each other, Merlin shuts down excess construction, possibly through ASPP2, and other proteins identified in this study. But when Merlin fails, a tumor can settle in, grow and start pushing neighboring cells around to make room.

Diving this deep into the inner workings of NF2 required unusual effort. The proximity biotinylation technique was developed more than a decade ago and has emerged as a tool for identifying protein-protein interactions. But for this study, the lab team had to adapt a range of new technologies to develop rapid and sensitive methods for confirming that proteins bind to each other.

“Instead of a more complicated process that can take two days to get a result, and still leave some questions about accuracy, this process can be done in an hour and a half with 10 times the sensitivity,” Hennigan says. “There is, essentially, no question that the proteins we found are actually binding to each other.”

Now that scientists can “see all the proteins in the room,” the next major steps in battling NF2 will be determining how the proteins function as a network, then finding ways to influence the network.