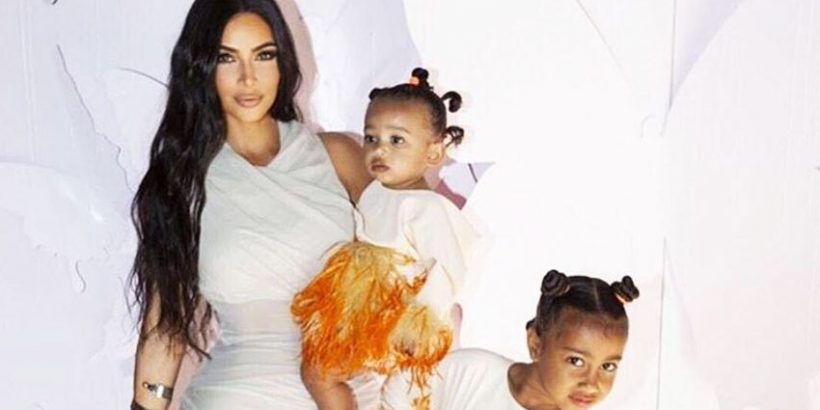 The Keeping Up With the Kardashians star, 38, shared five pics from the over-the-top first birthday bash that Khloé Kardashian threw for her daughter with ex-boyfriend Tristan Thompson at her home on April 14.

True’s cousins both wore cream dresses accented with orange feathers and had their hair pulled back and twisted into knots. But while Chicago, 15 months, wore sneakers, Kim’s eldest child with husband Kanye West donned a pair of her mom’s strappy stilettos, much to the reality star’s dismay — she could be heard asking the 5-year-old to take off the shoes at True’s party. (North seemingly refused.)

North was also by her mom’s side less than two weeks later when Kim celebrated the impending arrival of baby No. 4 via surrogate with a baby shower.

The bash on April 27 was chill-themed, with guests joining Kim and North for an outdoor yoga session.

“This year, because I am freaking out so much, I just want a zen-like CBD-themed baby shower,” the KKW Beauty founder told E! News ahead of the daytime celebration. “I just want massages, I want to do like a tea ceremony with crystals and we’re going to have a drink at this baby shower — we’re not pregnant.”

“Massages for all, like, just meditation, calm before the storm baby shower,” she added.

Us Weekly exclusively revealed in January that the Selfish author and the rapper — who are also parents to son Saint, 3 — have another little one on the way. The baby, a boy, is due any day now.

Scroll down to see the new pics of the Kardashian West clan.