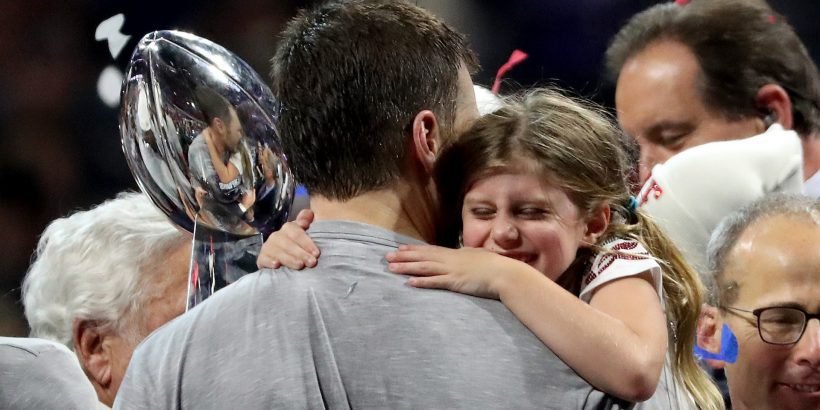 Come on, admit it: Super Bowl LIII between the New England Patriots and the Los Angeles Rams was a bit of a snoozefest with an ending as predictable as a perfunctory session of long-married sex. Yes, the Pats won again. Yes, this was quarterback Tom Brady’s sixth Super Bowl win. Yes, Maroon 5 sucks live.

The real MVP? Vivian Brady, the animated 6-year-old daughter of Tom Brady and supermodel Gisele Bündchen, who won hearts (if not points or yardage) during the Super Bowl postshow. Little girlfriend lost it when 4 zillion trees descended upon the Atlanta Mercedes-Benz stadium in the form of colorful strips of confetti. Social media was all over her reaction.

Papa Tom Brady held Vivian in his arms while he talked to reporters, but who remembers what he said? Like, nobody. Because Vivian was busy living her best life inhaling confetti and grabbing the Lombardi Trophy. Honestly, her postgame reactions were way more interesting than the game itself. Sorry, not sorry.

This amazing photo by Streeter Lecka of Getty Images pretty much says it all, we think:

Even Tom Brady haters had to admit Vivian made it a little bit harder to be a Pats troll.

And don’t even think about saying anything mean about Vivian. One, that’s just petty. Two, Brady cut an interview short last year after the host insulted his beloved daughter. And he can cut you too, just saying.

Bündchen posted an adorable Instagram shot of Vivian at the stadium last night before the big game.

Well done on that football thing again, Brady. But thanks for making it really memorable, Vivian.