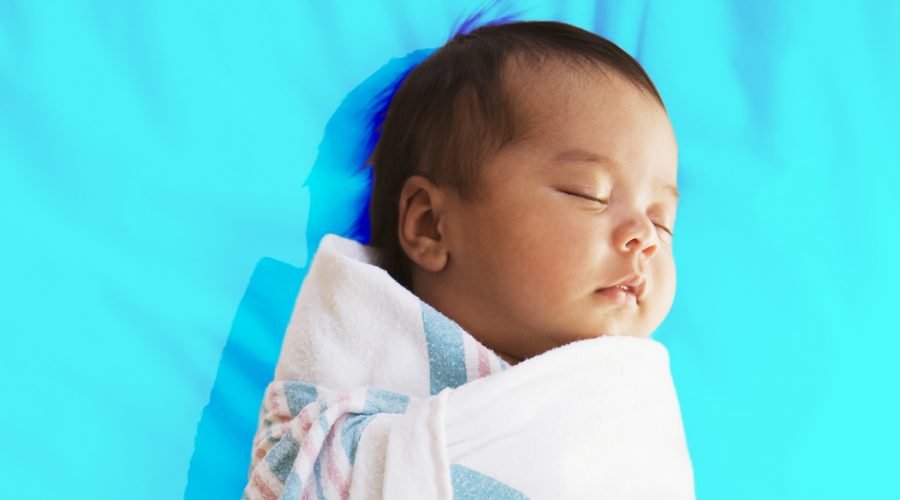 Naming a child is no easy feat. It can feel impossible to pick a name, let alone one your partner also loves. And if you want to steer clear of having the seventh Olivia or William in a certain preschool class, you’re probably on the lookout for a baby name that’s truly unique — but isn’t, um, you know, a weird celebrity baby name like Pilot Inspektor. Because not everyone likes the inevitable eyebrow raise and, “Oh, that’s an… interesting name.”

We get it; wacky baby names are on the rise, particularly among celebrities (looking at you, Jason Lee), but it isn’t either/or — a completely insane name or a terribly boring one. There are unusual names out there virtually guarantee your kid won’t have to use their last initial to differentiate between all the Sarahs but that also aren’t Apple, for example. But don’t waste your time scouring the millions of baby name websites, because we’ve rounded up 48 of the most unusual baby names that aren’t totally crazy. Your mother-in-law might even approve, and wouldn’t that just be a miracle.

Bennett: Originally a surname, Bennett is less unusual than, say, Benedict, but a much more interesting version of Ben.

Arlo: A short, cute name for either a boy or girl, the amazing Arlo Guthrie brought the name to the attention of the world. Although it is short, it has some pretty great nickname options, such as Arlie, Lo, Arles and Ari.

Flynn: More commonly a surname, this Irish name has been gaining popularity among celebs like Miranda Kerr and Orlando Bloom, but also sounds down to earth and relatable.

Turner: Turner is a sweet name for either a boy or a girl, and they will likely be the only one in their class.

Fielding: This name looks old-fashioned but has a romantic sound to it and conjures up images of writers or painters.

Callum: Callum is a Scottish-Gaelic name meaning “dove king” that has Cal as a nickname. Callum sounds edgy and unique.

Quinlan: Quinlan is a great unisex name that’s a contemporary twist on the more well-known Quinn.

Apollo: In Greek mythology Apollo was the son of Zeus and Artemis’ twin. He was the god of prophecy, medicine, music, art, law, beauty and wisdom. Later, he also became the god of the sun and light. Need more reasons than that?

Atlas: Atlas is another Greek name we love, and it means “to carry.” Atlas was a mythical Titan who bore the weight of the world on his shoulders, so the name has connotations of great strength.

Atticus: Atticus is actually an old Roman name made famous by author Harper Lee in her 1960 novel, To Kill a Mockingbird.

Huxley: Nicknames with X’s are getting more and more popular, in part due to actors like Dax Shepard. Huxley is a fantastic, very original name that can be shortened to Hux — or Lee if you’d like a more traditional nickname.

Homer: Yes, Homer Simpson comes to mind, but Homer lays claim to many other greats, like the Greek poet who authored The Odyssey.

Ryker: Ryker is a name said to have been invented in the U.S. following the popularity of other names beginning with “Ry-,” such as Ryan, Ryland and Ryder.

Harper: Paul Simon’s son holds this unisex name, and it’s been gaining popularity in recent years, although mostly for girls.

Milo: Ah, Milo. The perfect short name that requires no nickname, Milo was the main character in the beloved Norton Juster 1961 novel The Phantom Tollbooth and has been brought to the public’s attention with Milo Ventimiglia, star of Gilmore Girls and, more recently, This Is Us.

Acre: Acre is an unusual A name that should be considered if you like the name Adam but are looking for something less common. Acre is a nature name that has a soft, earthy tone we really love.

Wilder: Wilder is the perfect name for your little wild one and has the added bonus of perhaps the cutest nickname ever: Wiley.

Abel: Amy Poehler’s son bears this name, and aside from being one of the few not-overused biblical names, Abel can be shortened to Abe and comes from the Hebrew word for “breath.”

Ace: Short and sweet, Ace is the name of Jessica Simpson’s son and is a fresh new spin on short A names.

Major: Susan Sarandon’s daughter, Eva Amurri, named her son Major, which sounds bold and brave, and shockingly, the given name Major has been around since the late 1800s despite sounding more modern.

Dawson: James Van Der Beek’s titular character on the 1993 TV show Dawson’s Creek caused this name to jump into the spotlight; the name shot up more than 550 places on the Social Security Administration’s list of popular baby names in one year. Cue the early ’90s montage now.

Felix: Meaning “lucky or successful” in Latin, the name Felix is becoming more and more popular and sounds energetic and upbeat.

Bear: Yes, some animal names are a little out there (like Cricket — sorry, Busy Philipps… we still love you!), but Bear is one that has solidly stolen our hearts. Kate Winslet and Alicia Silverstone both used this name for their sons, and it sounds very warm and cuddly.

Dixie: The name Dixie is a sweet and Southern and peaked in popularity in 1938 but has since made a comeback.

Ellery: A twist on classics like Ellen and Emma, Ellery is a name that means joyful and sounds lilting to boot.

Fallon: Fallon is an Irish surname that will never be mispronounced thanks to Jimmy Fallon’s popularity.

Lennon: Lennon is a unisex name that has the adorable nickname Lenny, and thanks to John Lennon has some pretty incredible musical associations.

Luella: Shortened to Lu, Ella or Lula, Luella is a French name meaning “warrior” (yaaasss, queen!) and is a combination of two more common names, Louise and Ella.

Noa: Traditionally, Noah is a boys name, and it’s pretty popular. But for a girl? Not so much. Drop the H, and this common boys name becomes a unique and special girls name.

Alba: Alba is a short name that doesn’t need a nickname and alongside Alma is a nice change if you like other A names like Anna or Alice.

Josephine: Josephine can be shortened to Joey or Jo for a more unisex-sounding name and is the female version of the name Joseph. It sounds classy and gently offbeat without being too unusual.

Sadie: Sadie is full of sass and spunk and started as a nickname for Sarah but quickly became a favorite by itself. Sadie is a Hebrew name meaning “princess,” so if you saddle your little princess with this name, beware; she might live up to her name.

Vera: Vera is a lovely Russian name meaning “faith” that was the height of exotic fashion in 1910 and is getting a revival alongside equally unusual names like Iris and Agnes.

Nola: Nola is a Gaelic name that sounds haunting and beautiful and could also be used if you like names that are places, as Nola is a nickname for New Orleans.

Quincy: A presidential surname that is super-cute for either sex, it sounds strong and bold.

Romilly: Originally a male name deriving from Romulus, Romilly is now used for girls and has several amazing nicknames, like Milly, Romy or Ro.

Winslow: A unisex name with the nickname Winn or Winnie, Winslow sounds old-fashioned but joins the ranks of Theodore or Emerson for classic names that are gaining popularity.

Rowen: Another name with the nickname Ro, this unisex Scottish name means “little redhead” and was virtually unheard of in the U.S. until Brooke Shields chose it for her daughter in 2003.

Emmaline: This is a fun twist on names like Emma and Amelia that isn’t quite so popular. With nicknames like Emma, Lina and Mali, this is sure to be a one-of-a-kind baby name.

Coraline: While the name existed prior to Neil Gaiman’s novel Coraline, it certainly helped boost the name into the public eye. Guaranteed to be confused with the ever-popular name Caroline, Coraline sounds mysterious and unusual.

Ophelia: Everyone knows the tragic Shakespearean character who met her demise, but Ophelia is a Greek name meaning “help.” Roald Dahl named his daughter Ophelia, and it can also be shortened to the very sweet Lia.

Mabel: Old-timey names are great, and many should have never gone out of style. Mabel is one of those. Latin in origin and meaning “lovable,” Mabel is saucy and belongs in contemporary times.

Bellamy: Meaning “fine friend,” Bellamy is a name of English, Irish and French origin that is unisex and definitely unique. With the oh-so-popular Bella as a nickname, this might be a nice compromise for parents who like both popular and offbeat names.

Marlowe: Along with its cousin, Harlowe, Marlowe can be spelled Marlowe, Marlow or Marlo and sounds like an old-Hollywood starlet. An English name that is ladylike with a hint of sass, perfect for your little diva.

Sloane: Sloane (or Sloan) is an Irish girls name that rocketed into view with the 1986 film Ferris Bueller’s Day Off and has stuck around to become one of our favorite unusual names to date. 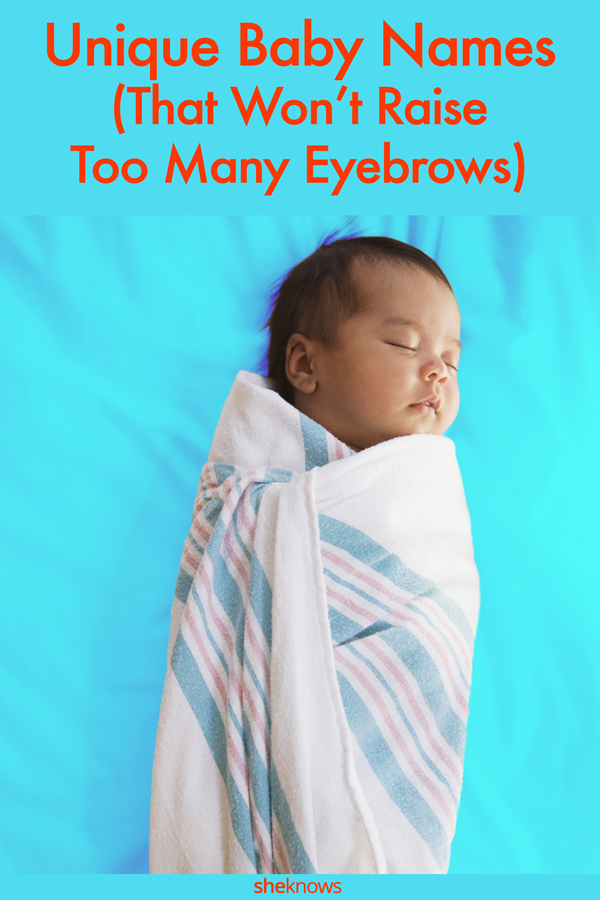