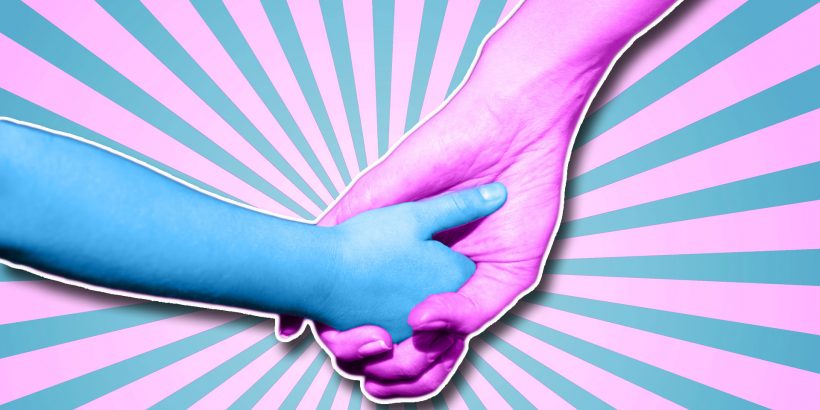 If you look on Instagram, you’ll find 6.6 million #BoyMom posts and only 2 million #GirlMom posts.

I’m guilty of it. Many are. We take pride in our kids. And because of that, we sometimes take pride in the uncontrollable pieces of them, like their gender. But when you dig a little deeper and really think about it, what does being a “#BoyMom” even mean?

I’ve always felt like the declaration of #BoyMom is used by a parent trying to embrace the mess, the smell and the general chaos of raising “boys.” But isn’t that radical acceptance of a chaotic life necessary of all parents regardless of their child’s gender? I have to wonder if we aren’t perpetuating a stereotype of the male gender by blowing up this identification of a parenting experience as chaotic and difficult — or as more important and deserving of a greater degree of pride — just because we’re raising boys instead of girls.

Here’s the thing: I used to pride myself on being a #BoyMom — until one of my kids started to come out as transgender. And now, here I am years later with an entirely socially transitioned transgender child, and my perception of gender has changed dramatically. If I’ve learned anything about parenting, it’s that nothing goes as planned. And more so, I’ve learned that gender is fluid.

Being the parent of a trans child has taught me many things — lessons I would have never expected to have to research and consider in such depth on an almost daily basis. But here I am. And I’m here to say that taking pride in being a #BoyMom is dismissive of girls. Here are some reasons.

Girls can do anything boys can do

This is a message I send to my sons and daughter often. In the beginning, I mainly wanted my trans son to understand that being born a girl did not mean he was limited to “girl things.” In navigating the waters of gender identity, I needed to know if he felt like he was living in the wrong body or if he felt wrong desiring things that went against societal gender norms.

As a matter of fact, my daughter is the one that’s glued to my hip all day long, and my son is the one that crawls into bed with me. My daughter tells me I’m beautiful, brings me a flower and wants to “cuddle” all day long. All of my kids have their own adoration of me, but none is even remotely related to their gender identity.

Boys are smelly & gross — but so are girls

My daughter has the stinkiest feet and the messiest room. She will eat an old grape she finds in the couch in under a second flat and not think twice about it. Disgusting kid behaviors do not discriminate based on gender.

But what if your boy doesn’t fit the boy mold? What if he likes his fingers painted or playing with dolls. What if he turns out to be (*gasp!*) transgender! When I think of boy moms, I think of soccer/baseball/basketball moms running kids from one activity to the next in her minivan with cleats littering their minivan and dirty jocks lying around the house. I have my own stereotype to defeat in this regard. Girls play sports too. I know a little girl who plays tackle football every fall with the boys, and she’s just as tough, if not tougher, than many of her male counterparts. My girl likes to collect bugs with her brothers and make mud pies in the summer. She farts and eats her boogers and laughs when it grosses you out. She doesn’t make me a #BoyMom, but based on the stereotype that surrounds it, her behaviors sure do! So by having both boys and a girl, aren’t I dismissing my daughter one “boy mom” hashtag at a time?

People seem to think that raising boys in today’s climate is an extra crucial and daunting job. But is it? The boundary between right and wrong hasn’t changed. It’s the strength of girls that has changed. It’s their ability to speak up, open up and not allow victim-shaming to dictate their lives anymore that has changed. I wouldn’t raise my son differently now than I would have before the #MeToo movement.

Women take pride in their children, that’s for sure. From celebrating the smallest things like clapping and smiling to hitting home runs and acing big tests, we want to shower our kids with pride and show the world how much we appreciate them for who they are. But taking pride in being a “boy mom” diminishes the equality between the genders. It amplifies the stereotype and gives excuses for the “boys will be boys” behaviors. And it also completely disregards those who are gender fluid or nonbinary. Let’s stop using hashtags like #GirlMom and #BoyMom and just say what we really mean with the best intentions we had at heart and the most inclusive message. That is #Mom.

This article originally appeared on Fairygodboss. As the largest career community for women, Fairygodboss provides millions of women with career connections, community advice and hard-to-find intel about how companies treat women.