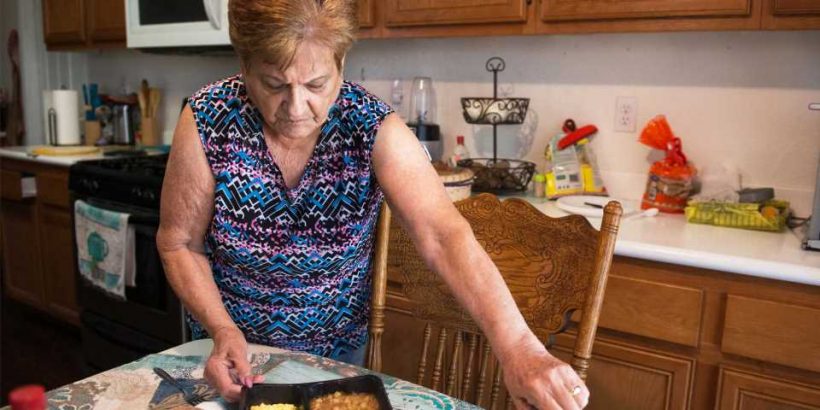 VICTORVILLE, Calif. — Every Friday, Frances De Los Santos waits for a shipment of healthy, prepared meals to land on her front porch at the edge of the Mojave Desert. From the box, the 80-year-old retired property manager with stage 4 chronic kidney disease unpacks frozen food trays that she can heat in the microwave. Her favorite is sweet-and-sour chicken.

In the three months since she began eating the customized meals, De Los Santos has learned to manage her diabetes by maintaining a healthy blood sugar level.

Two hours to the south, in Indio, Vidal Fonseca gets ready for his third dialysis appointment of the week. He, too, battles kidney disease and diabetes. The 54-year-old former farmworker was released from the hospital in November with an order to follow a strict diet, but he makes a mess in the kitchen and struggles to get his glucose under control. He doesn’t receive the prepared meals.

Here in California’s vast Inland Empire, where more than half of adults have diabetes or are at risk of developing diabetes, one health plan is delivering medically tailored meals to select patients. In bringing food straight to their door for a few months, state officials hope patients will develop healthier eating habits long after the shipments stop. It’s all part of a grand state experiment to improve the health of some of its sickest and costliest patients.

California’s five-year initiative, known as CalAIM, will test whether Democratic Gov. Gavin Newsom can slow public spending on Medi-Cal, the state’s Medicaid program for people with low incomes, which skyrocketed to $124 billion this fiscal year, up nearly threefold from a decade ago. Medi-Cal managed-care insurers will try to keep people out of expensive health care institutions by delivering social services, such as helping patients find housing, removing toxic mold from their homes, and delivering medically tailored food.

CalAIM, which is expected to cost $8.7 billion, is unconventional because it is being carried out primarily by health plans, not county social service departments. It will serve only a sliver of the 14.5 million Californians enrolled in Medi-Cal. And the state is still developing a way to track health outcomes, meaning nobody knows yet whether it will save money.

“This is a new program, and often with new programs, you’re building the plane as you’re flying it,” said Shelly LaMaster, director of integrated care at Inland Empire Health Plan.

The health plan is one of two Medi-Cal managed-care insurers serving San Bernardino and Riverside counties and has about 1.5 million enrollees. Inland Empire Health Plan says about 11,000 of its enrollees will be eligible for deliveries of meals and food boxes. The average meal benefit has a value of $1,596 and lasts three months, though health insurers can choose to extend food deliveries.

Because plans decide which enrollees receive services, many worthy patients — even those enrolled in the same plan or who live in the same county — are being left out. In the Inland Empire, some patients have started receiving food while others are still getting enrolled. So far, 40% of the recipients are Hispanic, 35% are white, and 18% are Black, which tracks with the region’s demographics. (Hispanics can be of any race or combination of races.) 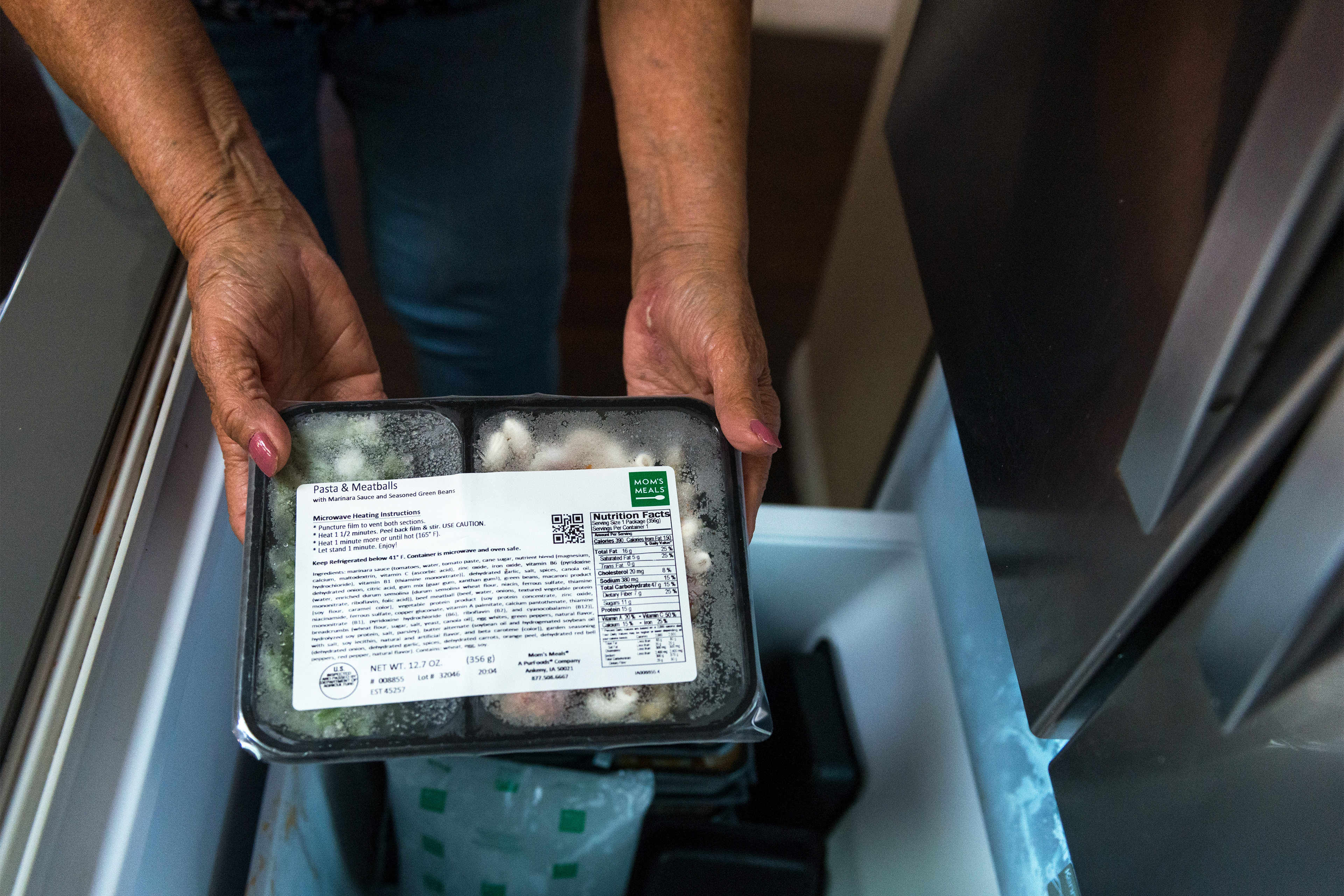 Initial deliveries for most participants will be frozen meals, varying from taco bowls to chicken curry. Later, they may receive boxes filled with fresh fruits, vegetables, whole-grain bread, pasta, and rice so they can prepare their own meals.

De Los Santos is among the lucky 720 enrollees who have been approved for the benefit since January. Participants must be referred to the program, but referrals can come from doctors, community groups, and family members — Medi-Cal enrollees can even refer themselves.

De Los Santos’ case manager identified her need after conducting an assessment. Then a dietitian screened her for her food preferences and health concerns to develop a nutrition plan.

Her first box of nutritionally tailored meals arrived in February from Mom’s Meals, one of two prepared-meal companies contracted by the Inland Empire Health Plan. Each week she receives convenient, microwave-ready meals and an information sheet with the macronutrient breakdown of each dish.

“I’m on an eating schedule now,” she said. “I’m eating lots of meats and salads and vegetables, like broccoli and cauliflower, that are good for me.”

Meanwhile, Fonseca, also an Inland Empire Health Plan enrollee, relies on his wife and daughter to figure out how to get his diabetes under control. After he was diagnosed in November, they scrambled to learn how to cook for him by looking up recipes online.

“Before he was diagnosed with renal disease, he was eating a diet high in iron-rich foods that are typical for us to eat, like lentils and beans, but not good for kidney disease,” said his 29-year-old daughter, Maria Cruz. “We were giving him poison.” 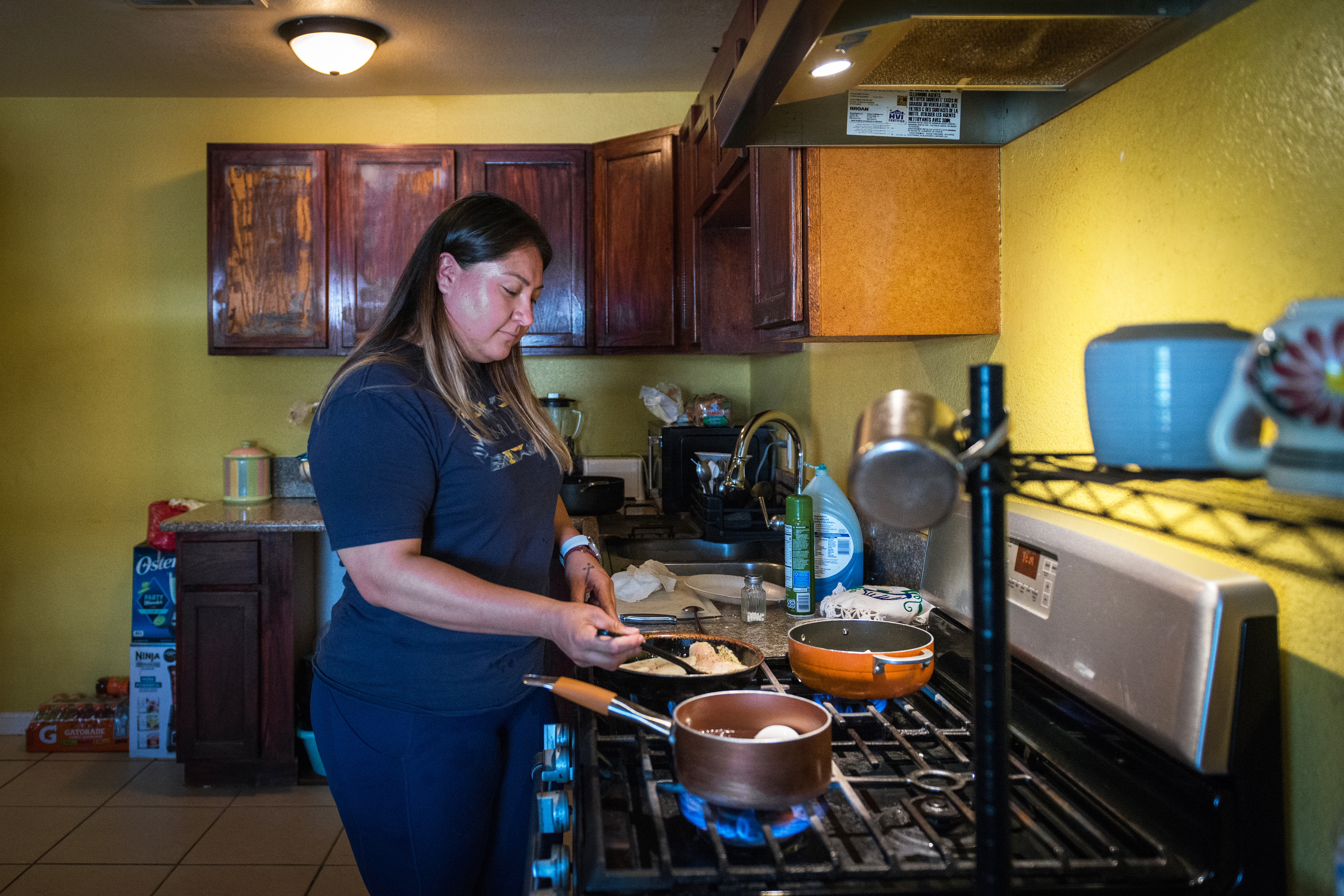 Fonseca said he had heard about food banks but not home-delivered meals. “The menu for someone in my condition with both renal failure and diabetes is very limited and specific,” he said in Spanish. “Talking to a nutritionist and receiving meals specifically made for me for free would be a huge help.”

But even though his conditions would qualify him for meal delivery, it’s up to the insurer to enroll him.

Participating in the program would alleviate the guesswork for his wife and daughter. Fonseca’s wife, Eufracia Constantino, still works in the fields. She wakes up at 4:30 a.m. to cook his breakfast every morning before she leaves for work. His daughter prepares lunch for him, which typically consists of chicken or fish, stir-fried vegetables, and hard-boiled eggs.

“I would usually be driving trucks with a burrito in one hand and the steering wheel in the other,” said Fonseca, who was an agricultural truck driver.

De Los Santos, who up until recently was the family breadwinner, has had to adjust to becoming a patient. Two months ago, her husband, Fermin Silva, became her state-funded paid caregiver and the couple struggles to pay rent and utilities. To save money, they will move into a two-bedroom mobile home next month.

While she saves money, Fonseca spends an extra $100 a week to buy the healthy food his wife and daughter prepare for him.

“We’ve had to stretch my wife’s paycheck,” Fonseca said. “We don’t fill the grocery cart up like before.”

The California Department of Health Care Services, which runs Medi-Cal, hopes the patients who receive medically tailored meals will tap the health system less often. The goal is to make people healthier by empowering them to adopt better eating habits and learn to sustain a good diet. Although some recipients may have irreversible conditions, such as congestive heart failure or severe diabetes, officials still see opportunities to reduce hospital admissions and emergency room visits.

Studies have shown that providing meal delivery services helps reduce health care costs. State officials note that food benefits will be expanded over time and that there’s no price cap on the initiative.

But the health agency could not provide data on how many Medi-Cal patients are eligible for food delivery and won’t report the number of people receiving the service until later this year. The state plans to gauge the cost-effectiveness of these social services as the program expands, according to agency spokesperson Anthony Cava. 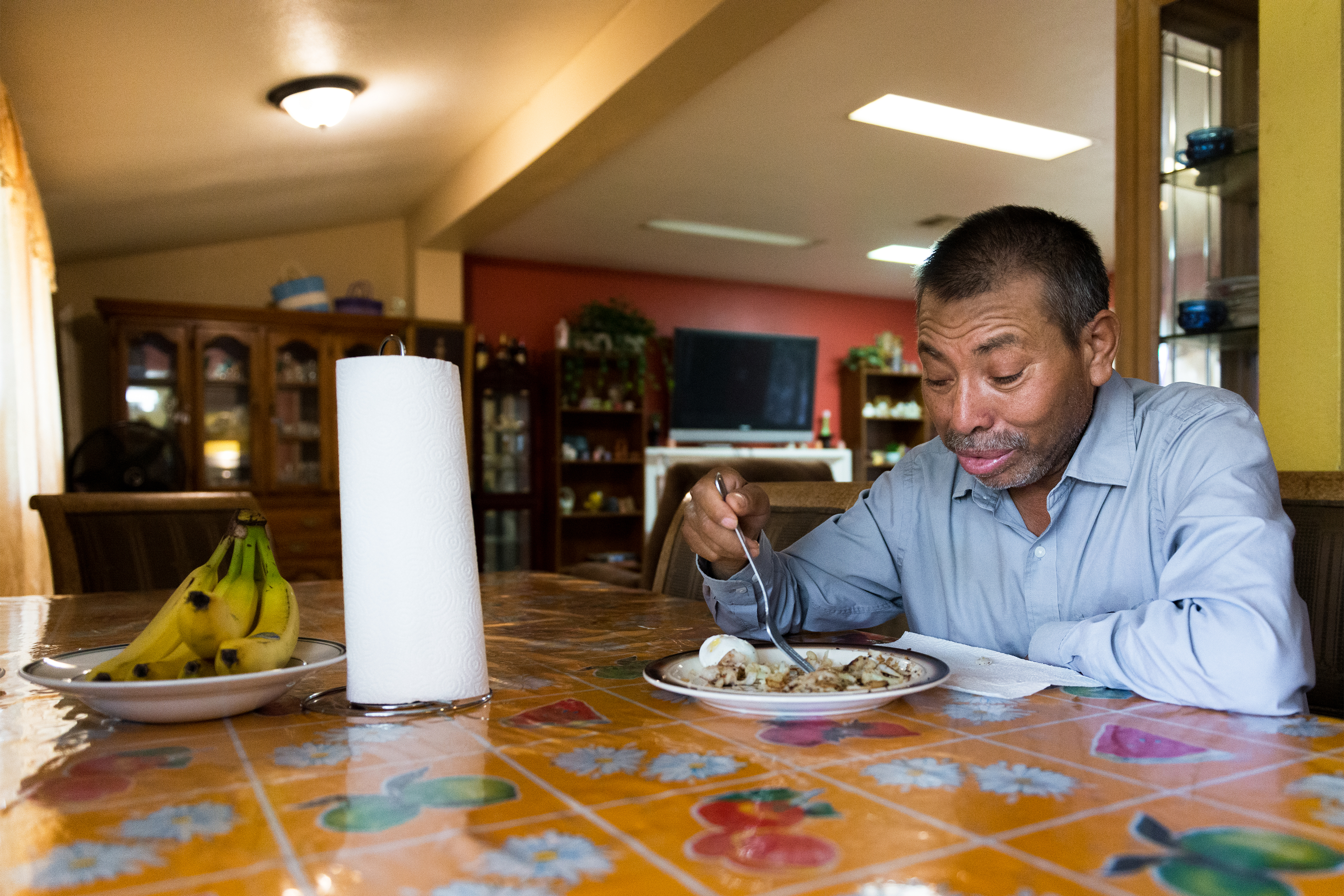 Inland Empire Health Plan officials say it could be challenging to identify the impact of an individual benefit since many members receive multiple services. And it takes time to realize health consequences.

De Los Santos’ meals will end soon. She declined an extension, saying she has learned enough about portioning and self-control. She feels confident about continuing her healthy diet with the help of her husband, who will cook for her.

“My husband tells me to slow down,” she said, “but I have so much more energy.”

Fonseca fears a lifetime of poor eating combined with a physically demanding job has taken a toll on his body. He used to work two fields in one day and traveled depending on the crop season. He never took time off. “Now all I have is time,” he said, “but the dialysis makes me feel exhausted.”

He asked his nurse about getting medically tailored meals.

“He has to be healthy to qualify to get on a kidney transplant waiting list,” said his daughter. “That’s our hope.”