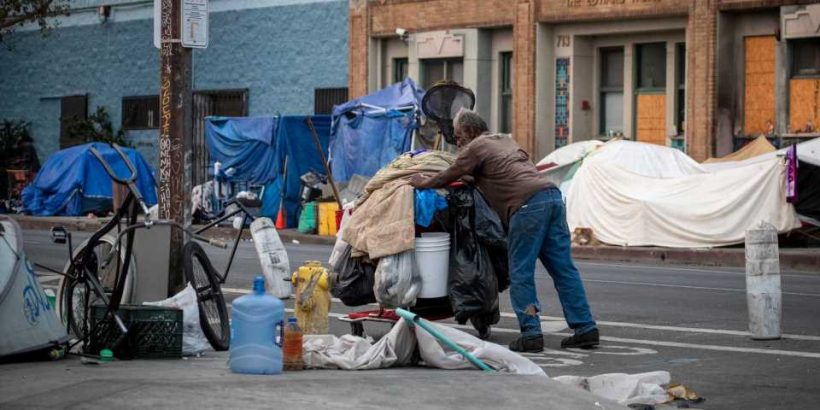 LOS ANGELES — As encampments multiply from Echo Park to Venice, homelessness has been the top issue in the L.A. mayoral race. And although Angelenos express broad support for building more housing for the homeless, the contenders say that can be only part of the solution.

Several top candidates say the city must also expand services for people struggling with mental illness and drug addiction. Although city officials have said 29% of homeless people have behavioral or substance use disorders, that number is likely far too low.

But the candidates don’t agree on how to deliver the services that would help them.

Their differences boil down to a deceptively simple question: Can the city do a better job of managing the homelessness crisis by itself?

“It’s a strange model we have in Los Angeles between the county and the city,” said Seth Kurzban, clinical associate professor at the University of Southern California Suzanne Dworak-Peck School of Social Work. “If they create a city model, it has to be something that functions and not what we have now, which is the culmination of decades of bad policy choices.”

The two local governments began working together in 1993 to coordinate housing and services for homeless people, but as homelessness has gained visibility in parks, along freeways, and on sidewalks, tension has grown between the two, putting the future of the arrangement in doubt.

Voters have also grown increasingly frustrated as they encounter homeless encampments in their neighborhoods. The homeless count in L.A. increased 16% — to 41,290 — in 2020, the most recent year for which data is available.

The June 7 primary will winnow the field of 12 candidates. The top two vote-getters will face off in the Nov. 8 general election.

Dr. Jonathan Sherin, director of the county’s mental health department, is encouraged that a handful of candidates leading in the polls are prioritizing behavioral health, despite their disagreement on governance. In the past, he said, behavioral health was treated as “a stepchild that has been neglected for decades.”

De León, a Democrat, believes the current patchwork system for dealing with mental health and substance use has failed. He said that creating a city department of mental health would be more efficient because it wouldn’t have to compete for funding with 87 other cities in the county.

De León also wants mental health professionals to be on duty 24/7 within the Los Angeles Police Department and accompany officers on 911 calls.

Bass, a former physician assistant who led a community-based substance use and prevention program in the 1990s, thinks creating a department could take 10 years and divert money away from homeless services. A better strategy, the Democrat said, is to continue partnering with the county to rebuild treatment programs for mental health and substance use disorders that were dismantled because of inadequate funding. She would like to add beds to residential treatment facilities.

Feuer, also a Democrat, agrees with Bass that the biggest problem is lack of resources, not bureaucratic inertia. Both candidates back the creation of a Trieste model, a mental health system named after the northern Italian city where it was pioneered in the early 1960s. The program focused on integrating people with mental illness into the community and providing them with extensive support services, rather than hospitalizing them.

Today, the Los Angeles County Department of Mental Health is in the final stages of setting up a Trieste-style pilot program in Hollywood.

“There is a roadmap for the future, and these problems can be fixed,” Feuer said. “But our choices will require political will to implement them.”

The Trieste model didn’t work when it was tried in San Francisco, however. In 2006, the psychiatry department at Zuckerberg San Francisco General Hospital began a collaboration with Trieste’s mental health department to replicate its model but abandoned it five years later after determining that differences in the social and economic conditions of the two cities made it impossible.

A new report is adding urgency to the issue in L.A.: Los Angeles County officials found a 78% increase in the number of drug overdose deaths among homeless people in the 12 months before and after the pandemic began in March 2020.

In recent weeks, the county has accused the city of shirking its responsibility by lowballing the number of beds needed for people who are chronically homeless so it can settle a federal lawsuit brought by downtown residents and business groups. A county commission has called for creating a czar-like position to direct all county homeless services. And the homeless authority will soon have a leadership vacuum — its chief has announced her resignation because of a dispute with the board over staff pay.

In other California cities that have borne the brunt of the state’s homelessness crisis, mayors haven’t focused as much on governance change. But they have begun lobbying for a greater slice of homeless funding.

“Here’s something that most people don’t understand or aren’t aware of: Cities are not homeless service agencies; cities are not health and human services agencies,” Sacramento Mayor Darrell Steinberg said at an April 25 news conference with 10 other mayors. The group urged the state to approve $3 billion in flexible homeless funds for cities over three years.

“All the mental health money and substance abuse money flows through the counties,” Steinberg said.