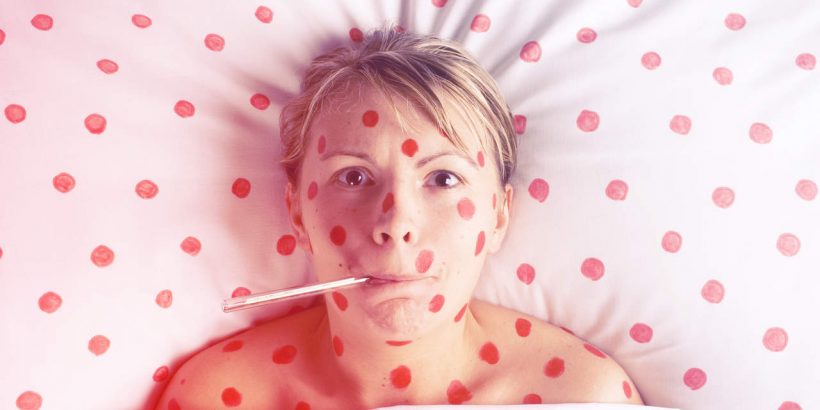 Coming up with a clever Halloween costume can be tricky and time-consuming: How can you find something that is unique, doable, and relevant? Even so, one woman probably should've taken a little more time deciding on her get-up.

According to a Reddit post shared Tuesday on the channel r/insanepeoplefacebook, the woman, who is not identified, apparently shared a photo on social media of herself with red dots all over her body. “Was trying to think of the least scary thing I could be for Halloween…so I became the measles,” she wrote.

That photo was then screenshot and shared by Redditor Darkizzle, along with a comment from someone who seems to be a physician below it. “Would you like to accompany me on my rounds?” the person wrote. “You can tell our measles encephalitis and viral sepsis patients, the ones in comas and seizures and high fevers, that their suffering isn’t all that bad and is just being exaggerated by ‘Big Pharma’ and clueless quacks who ‘haven’t done their research’ like me. You can even assist with the spinal tap! Read your favorite vaccine insert to them while they sob in fear and agony. Very cool and very fun!”

It didn’t stop there. The physician also called the woman a “horrible person and possibly a sociopath.” “How I wish children suffering in the infectious ward could dress as ‘fake diseases’ for Halloween like the privileged idiots who put them there.”

The post has gone viral on Reddit, with many people sharing their own thoughts in the comments. “I always thought anti-vaxxers laid on the premise that there’s no reason to get vaccinated because they are ‘bad’ and the chances of getting one of the diseases is so low, that they'll chance their child getting sick,” one wrote. “I never thought that they actually believe that these aren't actually deadly diseases that kill children."

“I was part of the last generation before the chicken pox vaccine. I had it. There were complications. It was not fun. And that was just chicken pox…god, measles is an order of magnitude worse and far, FAR more dangerous,” another said, while someone else simply wrote, “What the actual f*ck.”

Just in case you need a measles refresher: It's caused by a highly contagious virus that can lead to serious complications, including pneumonia and encephalitis (inflammation of the brain), according to the Centers for Disease Control and Prevention (CDC). Children under the age of five, adults older than 20, pregnant women, and those with compromised immune systems are at the most risk of serious complications, the CDC says.

While the measles, mumps, and rubella (MMR) vaccine helps protect against measles, the overall national average of children in the U.S. that have received the vaccine is 92.7%, according to CDC data. However, the number varies by state, with 11 states in 2017 having coverage of less than 90%.

Getting vaccinated against the measles can help prevent someone from getting the disease, which is why the CDC and other major medical organizations recommend getting the MMR vaccine between 12 and 15 months old, and getting the second dose between ages 4 and 6. The vaccine protects those who cannot get vaccinated due to medical exemptions by way of herd immunity.

Clearly, the costumed woman didn't think things through, and everyone can only hope she's learned her lesson for next year's Halloween—and maybe about vaccines in general.